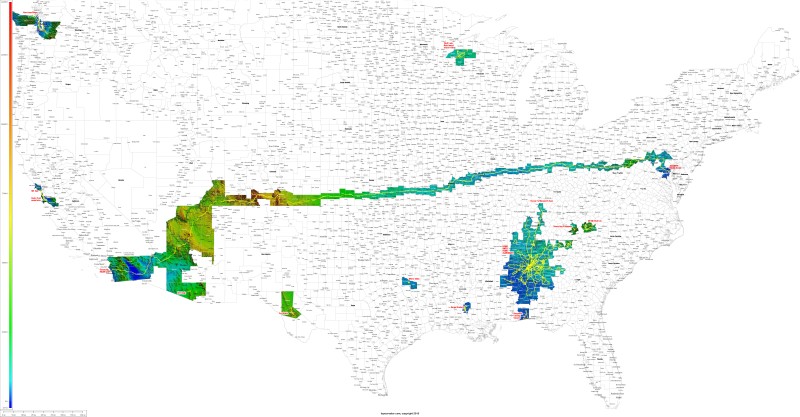 Every January I look forward to writing this blog post with a summary of all the statistics, data, and maps from the previous year’s racing. This year’s summary took a bit longer because I wanted to add a new feature to topocreator.com where you can isolate and retrieve only the elevation data for the counties entered on rides. This makes it easy to see and count the number of counties entered on rides. Using this feature, I determined that I rode in 23 states and 203 counties in 2015 as shown in the map above. In Alabama alone, I rode in 52 of Alabama’s 67 counties as shown in the map below: 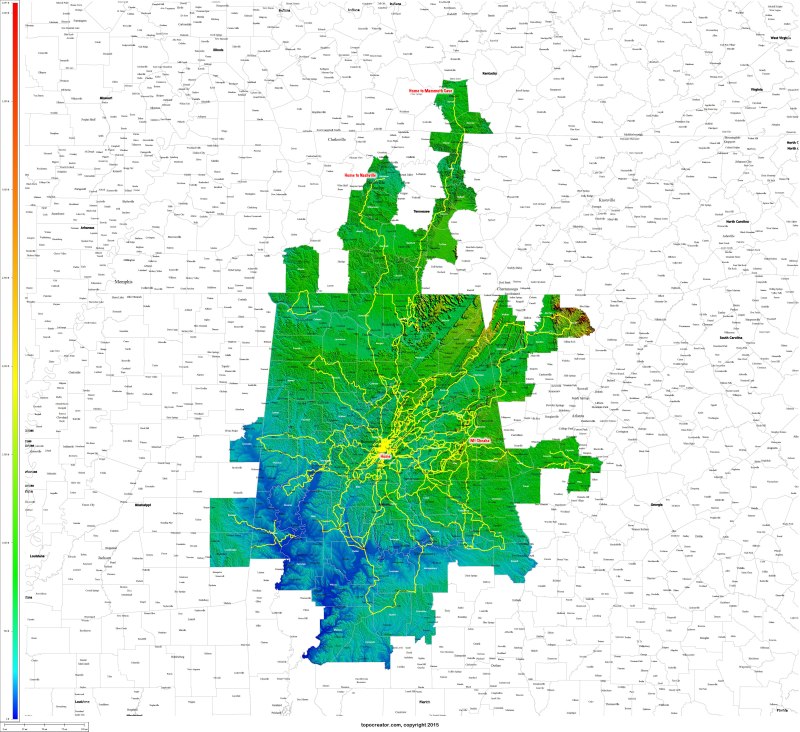 topocreator.com map of all my rides in 52 of Alabama’s 67 counties. This map also includes rides that started at home and went into neighboring states of Mississippi, Tennessee, and Georgia.

Finally, veloviewer.com makes it easy to see everywhere you’ve ridden. Here’s an annotated map of my riding since November 2008 when I first got a GPS, plus a comment about some of my riding pre-GPS (i.e., 15 years from 1993-2008).

veloviewer.com annotated map of all my rides from November 2008 until December 31st, 2015 with note about rides pre-GPS.

Alabama the Beautiful
Why counties? When I was training for RAAM, I wanted to showcase the beauty of “Alabama the Beautiful” by visiting as many counties as I could during the lead-up to RAAM. I ended up covering most of the state, but the bottom counties were just too far to get to on out/back rides from my house. To get to all those counties, I did one 500+ mile ride (Heart of the South 500), six 300+ mile rides in Alabama, and thirty-three 200+ mile rides in Alabama. Alabama truly is a beautiful state, and I could not be happier living here. You can’t ride half a mile in Alabama without seeing something cool and different. It never gets old! The biggest surprise for me while exploring counties was Natural Bridge up in Bankhead National Forest northwest of Birmingham. The only reason I was riding up there was to hit four counties in Northwest Alabama (Winston, Lawrence, Franklin, and Marion). Along the way I stumbled upon natural bridge.

The highlight for this season was definitely finishing 7th place in my rookie attempt at the Race Across America. I didn’t meet my time goal or finishing place goal, but I was very happy to exceed my fundraising goal for Nuevas Esperanzas. Thank you everyone for the huge amount of support I received in this race. I wish I could have done better, but I am happy to have finished and hopefully represented Alabama well.

With RAAM my racing/training became an all-year effort with no offseason. So I’m updating all of my past statistics to a calendar year instead of a racing season year. Veloviewer and Strava have implemented all the features for end-of-season analysis that I used to do with the Polar Protrainer software. Unfortunately, I did not get a GPS cycling computer until November 2008 so that is as far back as my data goes.

Annotated veloviewer.com 2015 graphic – 30,130 miles and 3,323,393 feet of climbing. The max ride distance and max ride time are both off because I split up the Heart of the South race in early April into two separate rides. The 426 mile ride was immediately followed by an 85 mile ride with a couple miles of warm-up on the way over to the start for a grand total of 513.8 miles in just over 30 hours with no sleep.

Comparison to past years (updated to calendar year)
All these stats are based on the calendar year January 1st – December 31st.

* Using Polar Protrainer software to calculate data based on my Polar Heartrate monitor (without GPS) for the 2008 season. This software doesn’t distinguish between “moving time” and “elapsed time”. The 2008 figure is “elapsed time” whereas all the other years are moving time as reported by Strava and Veloviewer.

End of the year milestones
November and December were quite busy for me as I pursued three major calendar year goals – 1,000,000 meters of elevation gain, an Eddington number of 100, and 30,000 miles of riding.

I crossed over the 1,000,000 meter mark on December 23rd during the middle of a very hot (temps in the 70s) and wet week of riding down in Alabama. My original goal had been 3,000,000 feet of climbing, but when it looked like I was going to blow past that near the end of November I thought I would up my goal to 1,000,000 meters (3,280,839.9 feet). I tracked my progress on a website I created (howmuchtogo.com), and no matter how much I was climbing I seemed to be stuck in the 10,000-11,000 foot range per day in order to meet this goal. But after a fun 10,000 meter (~33,000 feet) adventure to Inland Lake on Pine Mountain, the goal started to quickly come into focus with me chopping hundreds and eventually thousands of feet per day off the requirement. See graph below.

The last 16 weeks of my progress on howmuchtogo.com towards my 2015 elevation climbing goal of 1,000,000 meters of total elevation gain.

Location based milestones were many. First, I rode across the entire country. Second, I made it from Birmingham all the way up to Nashville having failed to do that in 2013. Prior to that, though, I rode all the way from Birmingham up to Cave City, Kentucky through some very rural and fun ridges and hollows of Tennessee. Another goal was to do rides starting and ending at my house that hit all the neighboring states. I did a 295 mile loop to Tennessee, 263 mile loop to Mississippi, and a 244 mile loop to Georgia. I didn’t make it to Florida, but the loop I did to hit some of the South Alabama counties was 313.5 miles long!

The #’s in parentheses are the number of rides in the month that met the minimum Gran Fondo distance.

Huge thank-you
So this post has been just a bunch of stats and maps, but the real story is all the people who made it possible. I owe a huge debt of gratitude to so many people, and I want to thank so many people, but it really is too many people to thank by name. Know that I am deeply appreciative for all that everyone has done for me this year. I do want to thank one person, though, my beautiful wife Kristine Toone, who has put up with all the hours on the bike and endured nights of troubled sleep waking up frequently to check the Garmin tracker to make sure I’m still moving in my overnight and all-day rides. Also, during the Race Across America, I got to a point where I really just wanted to talk to her all the time so she dealt with a lot of the stress of the race and helped me through it amazingly. My favorite picture from RAAM is this one where I realized how madly in love with her I still am 14 years after meeting her at Mercy Ships in Texas.