Not quite as large a field as the previous days, but still well over 75 riders lined up for Stage 5 of the Tour of America’s Dairlyland. This course is very similar to the Barber’s course that we race every year in Alabama, but maybe a couple miles longer. Check out the topocreator map below: 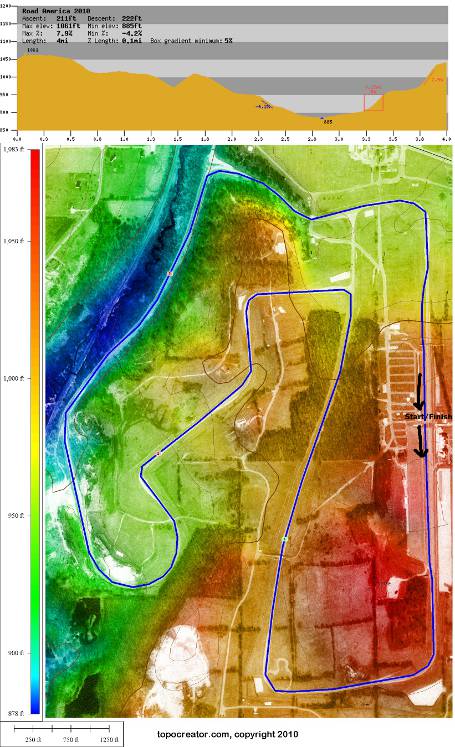 In the first 5 laps, there were a lot of small breaks/moves/chasing, but everything would bunch up on the course’s 2 main hills. I knew from experience at Barber’s that it’s really hard for a break to stick, so I wasn’t going to go with any early moves — or at least that was the plan. But at the beginning of the 6th lap, I found myself pretty far back in the field and wanting to move up. I saw a rider who looked like he was getting ready to move up, so I hopped on his wheel. As he ramped up the speed, I realized he was intending to attack to bridge to a chase group of 3 that was chasing another break of 3 that was still up the road. It wasn’t part of my plan, but the opportunity was too good to miss, so I quickly grabbed onto him and together we bridged to the chase group.

We were moving fast and half a lap later, our group of five had caught the leading trio, making our group a break of 8. With almost 50 miles left to race, it was going to be a long day. But by the end of that lap our gap was already 45sec, and one lap later, it had grown to 1:05, where it stayed for the next 9 laps. Then the main field started to chase in earnest, and our gap had shrunk to 25sec with 3 laps to go. We flew around the course on the downhills and straightaways during our breaks, but we crawled up the uphills — so I was surprised that our break had lasted as long as it had. With 2 laps to go, Johnny Sundt (Kenda) attacked hard on the start/finish hill. This split our group in half with me and two other riders able to go with him on the climb. We got into a rotation, but the other four riders bridged up to us by the end of that lap. Also by the end of that lap, our gap had ballooned back up to 1minute, 20 seconds so we knew at that point that we weren’t going to get caught.

In the ensuing cat/mouse game, a rider slipped away solo and stayed away with none of us making an organized effort to chase. In the final mile, another rider got away solo with too many of us eyeing each other to see who would chase. So he ALSO stayed away which meant, six of us would be sprinting for 3rd place. Mike Sherer (ABD) attacked at the bottom of the climb, and I bridged up to him and countered hoping to win the sprint up the 10% gradient by dropping the group. I dropped everyone but Sundt who stayed glued to my wheel and came around about 100 meters before the line to take third with me coming in just behind him for 4th. 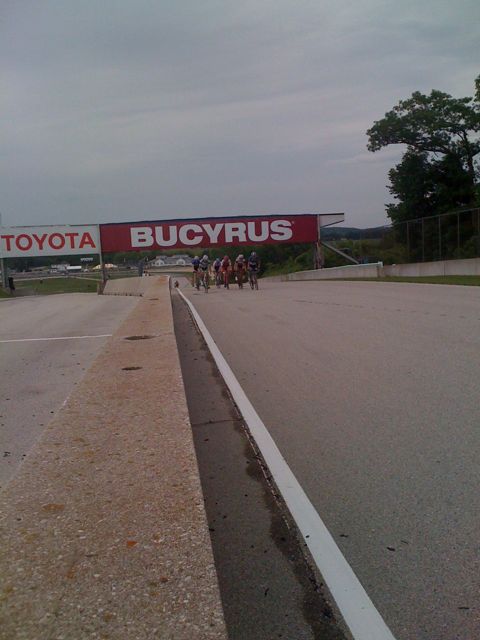 Me leading the break through the start/finish hill

Me leading the break again on the start/finish hill

The eventual winner making his attack with one lap to go

Me at the front of the sprint for third place

2 thoughts on “Road America Tour of the Dairyland report”