The Report
My first experience in timed endurance mountain bike racing went really well – I came away with a win in the solo expert class. But more importantly I think the switch flipped on during the first lap of the race, and I discovered how to ride a mountain bike over technical terrain. I still have a long ways to go with a mental battle to trust the tires on tight turns, but I have much more confidence rolling the 29er over rocky and rooty terrain. I got the hole shot into Mr Toad’s after nearly running into the back of the lead vehicle. I got passed by one rider (a 6 hour solo rider) in the tight switchback turns at the end of Mr Toad’s, but I had no problem catching back up on Johnson’s Mountain. I decided not to pass, though, because I knew he would be fast down the descent, and I wanted a firsthand view of how to ride the Johnson Mountain descents fast. It was awesome. I kept up through most of the descent, but lost him in the tight turns just before crossing Peavine. Also, Eddie O’Dea and one other rider had caught up to us at the road so I slowed for a second to let them by on the road rather than entering the next twisty section and having to let them by there.

I lost some ground on the initial technical part of the Bump climb, but then caught up to Eddie and the other rider by the big berm before the bumpy steep part of the climb. They let me by and I flew up the climb. I wanted to try to have a big enough gap so as not to get in the way on Jekyll. I ran up Blood Rock and continued running through the switchbacks where I had fallen and hurt myself last Wednesday. Plus, for me it’s actually faster to run that section than ride it … especially if you don’t clear the switchbacks. I entered Jekyll nervous but fast which turned out to be key to riding that section (thanks John Karrasch). I rolled over stuff that I had to walk previously. And other stuff that I wanted to walk I came onto too quickly to stop so I had to ride it. And after not falling through each tricky drop or rock section, I got more and more confidence. Then shortly after the switchback that separates the two technical sections of Jekyll, I bobbled and unclipped right as Eddie was catching up to me. So I let him by and then tried to follow his line. I had to unclip two more times, but I was close enough to see some of the lines he took and also see that he was riding everything which gave me the confidence to try everything. This was hugely important for me eventually winning the race. If I had done all of Jekyll on my own then I may have not even attempted some of the trickier sections, let alone seen the lines to take. Huge thanks to Eddie!

Also, while I’m thinking about it – huge shout-out to Jacob who convinced me on Thursday night during our practice run on the course to run much lower tire pressure than I have been running. I ended up with 25PSI front and back for the race instead of my normal 30PSI. Also, thanks to Boris Simmonds for showing me the fast lines at night down the Hyde portion of Jekyll and Hyde and also for teaming up to share resources in the pit. I loved the sign he made “Borat & Toone” and wish I had gotten a picture of it. And thanks to Lennie Moon for coming out and cheering with his family. Also, a big thanks to John for the advice about just tackling Jekyll one section at a time and not looking too far ahead, this was hugely important later after I got more comfortable so that I stayed focus on the immediate section. I basically learned that the bottom portion of Jekyll only has three sections which are tricky and knowing that meant I could roll the stuff in between faster and use each of the tricky sections as benchmarks for the descent. Also, thanks to Roger Byrd from Bob’s Bikes for loaning me his awesome headlight.

I crossed the line in third after the first lap, but the two riders in front of me were a six hour solo expert rider and Eddie from the Eddie/Namrita six hour team. So that meant that I basically led the 9 hour solo expert race from start to finish! I ate a powerbar each lap and drank a full bottle of gatorade each lap. So I felt like I stayed on top of my nutrition better than I have in previous long mountain bike races (Leadville and Fool’s Gold, particularly). Still, I was really struggling on the 7th lap and by the time it got dark I got nervous that I was going to see Jeff Clayton’s lights approaching me. But when I made it up Blood Rock and could look down the entire bump climb and not see any lights I knew that barring a mechanical or bad fall I was going to win! That last time down Hyde was a bit tricky because I got into the mode of thinking “don’t fall, don’t fall” rather than just flowing with the descent.

Here’s my data from the race.

Analise and Josiah got to participate in the racing action as well. The day started out with a kids race at 8:30. This was the first time for my kids to ride on real trails apart from the 0.2 mile section of woods on the way to school, which is pretty much a straight shot downhill. So this time they got to ride uphill, around corners, over bridges, around logs, and roll over small roots on a mile long portion of the family trail. They loved it!

Finally a couple frantic (me being the frantic one) videos from the pit and gallery of pics from the day: 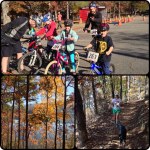 Everybody lined up at the start at 10AM