The highlight of the first day was driving I-20 through East Texas where Kristine and I first met 11 years ago. 9 years of marriage and 2 kids later, we stopped at the same Dairy Queen where we used to hang out together. We ended up at 1:30AM in Wichita Falls at a Holiday Inn called “Holiday Inn – Wichita Falls (At The Falls!)” including the exclamation point.

The second day had lots of highlights, including a rural rest area at the foot of a volcano outside of Raton, New Mexico. But the main highlight of the day for me was when Kristine dropped me off in Raton, and I rode the Old Raton Pass into Colorado on a 30 mile ride to Trinidad, Colorado.

I had used topocreator and initially was going to try to ride alongside the railroad up and over the pass, but then I found a dirt road leaving Raton called Old Raton Pass. This road climbs from within Raton up past a start on top of a hill overlooking a city all the way up to the old “Port of Welcome” for New Mexico. Along the way, there is this sign: 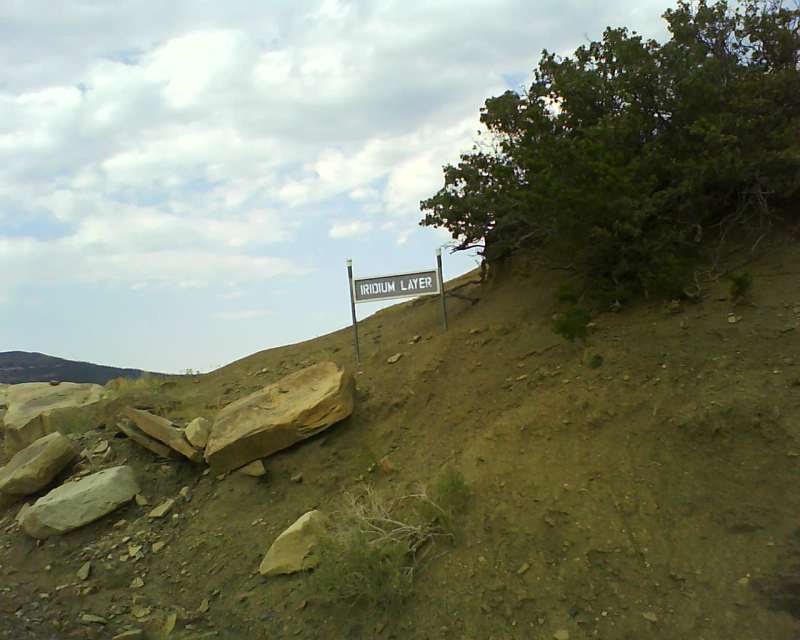 I was really curious, so I went around the corner and found a burnt (maybe from a forest fire) informational sign talking about the KT boundary, which relates to the layers of the earth before and after an asteroid impact millions of years ago. I continued climbing until I came to the abandoned New Mexico welcome center – and the mother of all barricades (for motorcycles, atvs, etc…) complete with a trashed ATV perhaps as a warning and also a full-blown moat. I knew that it probably was supposed to keep out bikes too, but I needed to get across the border to Kristine in Colorado. 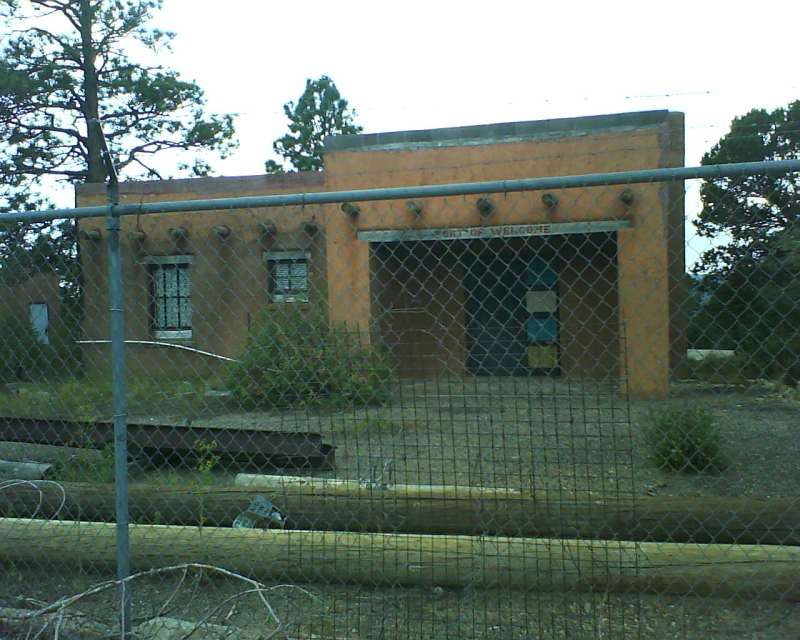 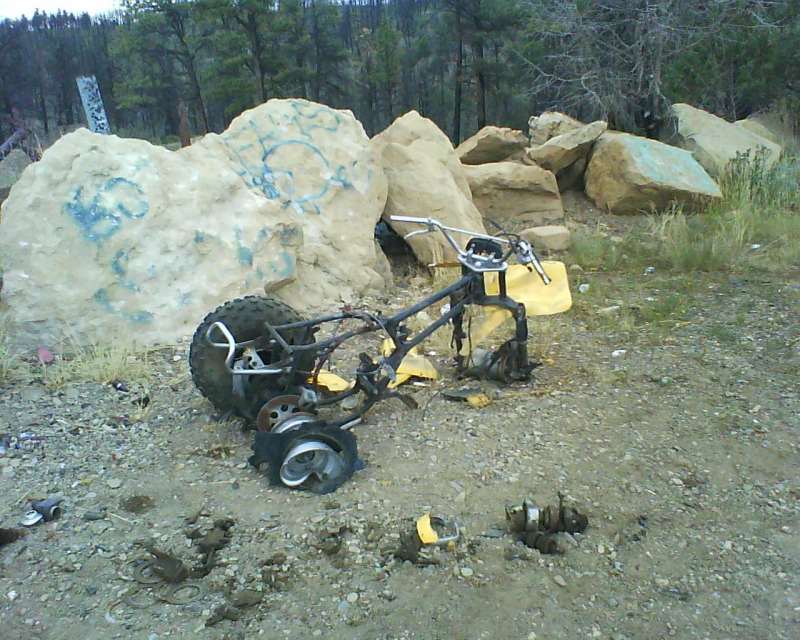 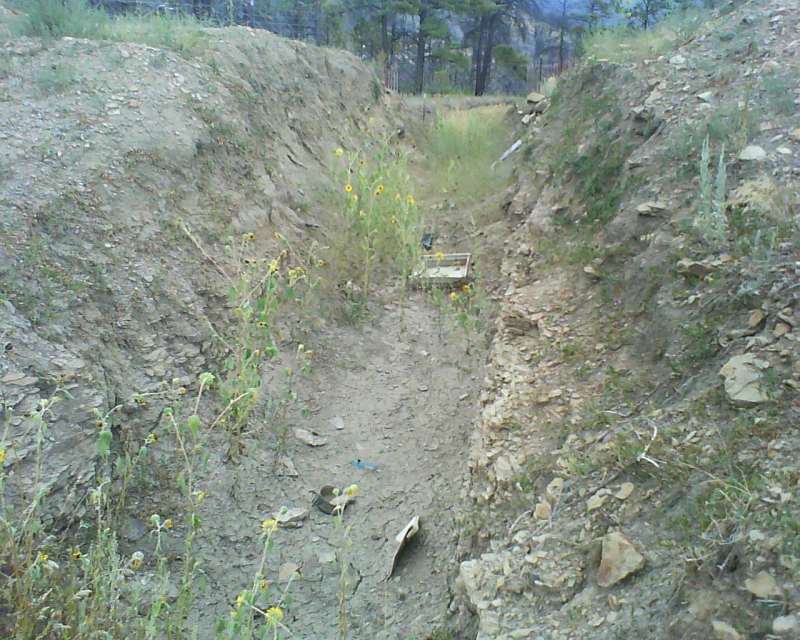 After the moat and a long gradual descent, there was a long gradual climb up to the pass with old stonework from the original road. Shortly after the top on some rolling double track, there was a barbed wire gate with the barbed wire attached to a thick stick held in place by two metal rings. The ring at the top was held top by a latch mechanism. I figured out how to open (and close) the gate continued on about a quarter mile to a fork in the trail with two gates – both the same type of barbed wired gate. Once through this gate, the trail really started to descend.

The double track was perfectly smooth, and I had just started to pick up the pace when I came across a few cows grazing next to the road. They didn’t seem to think twice about me so I kept on going and that’s when I entered into the middle of an elk herd. That is quite an experience. Elk were diving for cover around every corner. At one point there was elk running alongside and in front of me. There was elk of all sizes, too. I would guesstimate that there were maybe 50 elk in the herd. I only saw one bull with a full rack of antlers. It was exhilarating and terrifying at the same time to be so close to these large animals scattering every which way.

After the elk, it was pretty much a straight shot down and out of the area, a thick metal gate to climb up and over, a railroad tunnel, another gate to crawl under and finally out onto the interstate. Yes, I ended up riding on I-25 north for a few miles, but per the picture below, I was allowed to be there. Plus, the interstate was really deserted – maybe 20 cars and 5 tractor trailers passed me during the few miles I was on the interstate.

The final stretch into Trinidad was amazing with the sunset sky and layers upon layers of HUGE mountains glowing orange … my camera phone picture doesn’t even pick up all the high mountains in the distance. 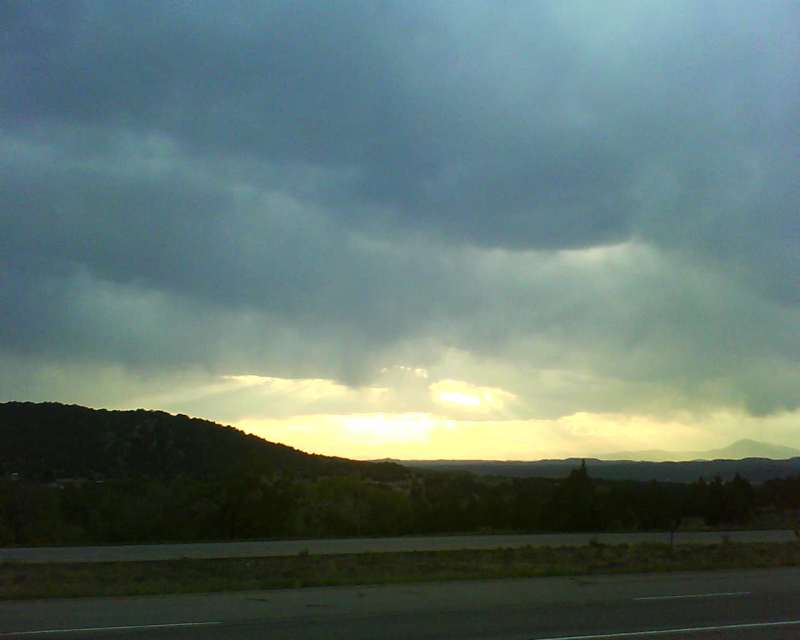 I met up with Kristine where we ate at a fancy Italian restaurant complete with some really amazing singing waiters and waitresses. I got a video I’ll try to remember to upload when we get back to Birmingham.

Day 3 (today) was check-in day at Leadville. They have a really well run organization and we breezed through the long lines thanks to all the great volunteers. After picking up everything we went to the gym for the motivational and informational meeting. It was inspiring – highlighted by the Wounded Warriors and the Ride 2 Recovery – veterans and active military wounded in action who will be racing Leadville tomorrow. Also, Lance Armstrong made a surprise visit to encourage and motivate us (plus, I think he may be racing tomorrow?)

It was a great meeting, but towards the end it did get a little long. After the meeting was the highlight of my day – Kristine went for a run and I went for a ride on the opening 20 miles of the course including the powerline descent. Powerline wasn’t bad at all if you take it slow – but I can see how people could get hurt because the trail itself keeps begging you to let off the brakes and fly. I went down it slow and nearly fell once so I’m going to have to be careful tomorrow if I’m with people who are trying to bomb the descent. 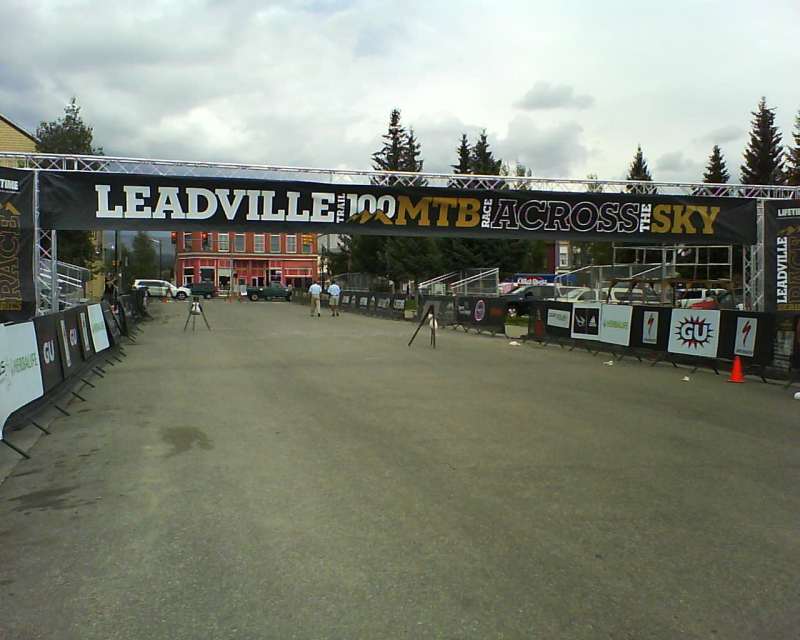 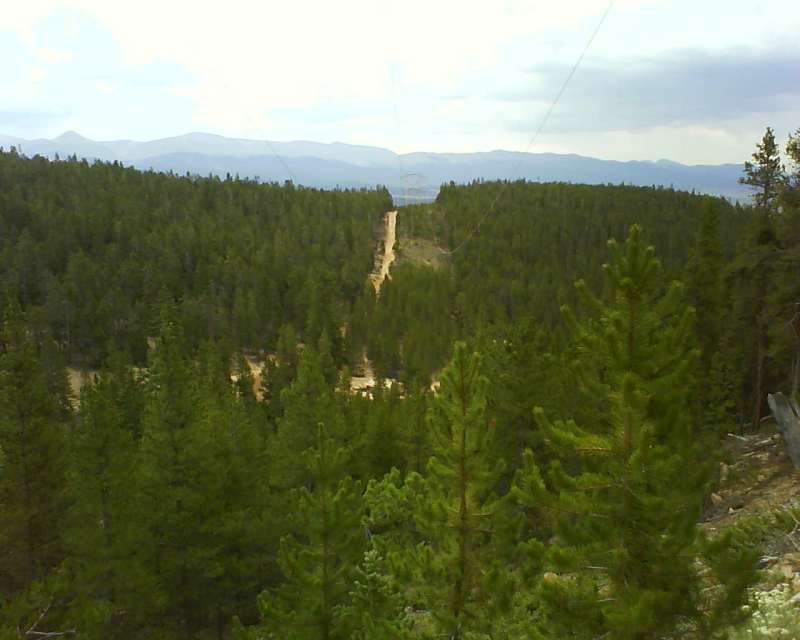 Looking down towards Raton, NM

Looking up towards Old Raton pass

Near the abandoned New Mexico port of entry – looking back towards Raton, NM

Near the abandoned New Mexico port of entry

Double track after the barricade and the moat