Day 1 – Birmingham to Mt Magazine – 450 miles
We arrived an hour or so before sunset after driving well over 400 miles from Birmingham. The kids were excited to go for a bike ride around the state park loop to go see the sunset at Cameron Bluffs – found cool trail connecting the campground to the overlook. Analise was really brave to ride her bike down a 15% grassy slope. Josiah felt it was quicker just to hop off and run down the slope with his bike. Beautiful sunset (see timer picture below). We had a nice dinner at the lodge and a good night’s sleep waking up to an absolutely amazing sunrise overlooking the valley 2000 feet below. Here is my favorite picture from Mt Magazine:

Day 2 – Mt Magazine 2x plus drive to Bernalillo, NM – 830 miles
Rolling descent down to Paris – zero traffic, turn around in Paris – rolling climb back up, realize running out of time so pick up the pace before the top. Zip back down the other side to the low point before Havana … turn around do just below AT effort on the long climb back up. Very cool climb, short hiking trail at slow speed up to the true summit – cat 1 climb. Lunch at the lodge – 830 mile drive to Bernalillo – arrive at 12:30AM, asleep by 1AM

Me at the Arkansas state high point after long KOM effort

Day 3 – Sandia Crest plus drive to Grand Canyon – 425 miles
I picked Bernalillo so I could be close to the Sandia Crest climb. The climb started out as beautiful pavement, but then I saw a sign fairly early on that says “unimproved road ahead, local traffic only”. The pavement was great, though, with cool pueblo neighborhoods and fantastic view of the Sandia Crest peak and all the rocky outcroppings for several miles of the climb so I didn’t think much of it – thought maybe it was an old sign … didn’t believe it.
Then I saw another sign that says road closed for winter proceed at own risk. Shortly after that sign the beautiful pavement transitioned into a rocky, dirt road sometimes steep, basically a rouge roubaix style road except continuing on and on forever (7.5 miles of climbing to be exact). I immediately backed off the pace and picked my line very carefully not wanting to flat in such an isolated area. I passed by the entrance to Sandia Cave where there is a picture of a woman next to a sign that said “unsolved murder 1999”. Most of the climb was rocky, but there were several hard-packed non-rocky dirt sections that were fun, absolute beautiful scenery narrow roads. I lost my gps signal a couple times through the canyons.
After 7.5 miles of the dirt road, I emerged onto NM-536 which was nicely paved and had lots of horseshoe switchbacks on the way up to the crest. It was hard to push any harder than 240-250watts. I’m not sure if it was the altitude or the length of the climb? There was a stunning view at the top of the mountains and crags below and Albuquerque stretched out far below. The gift shop is built at the high point with a radio tower armada immediately adjacent. Amazing views.
No way I was going to do the dirt descent, so I headed all the way back down to 536 to the I40 corridor back into Albuquerque where I called Kristine to coordinate meeting her at an exit ramp (#164) from I40. 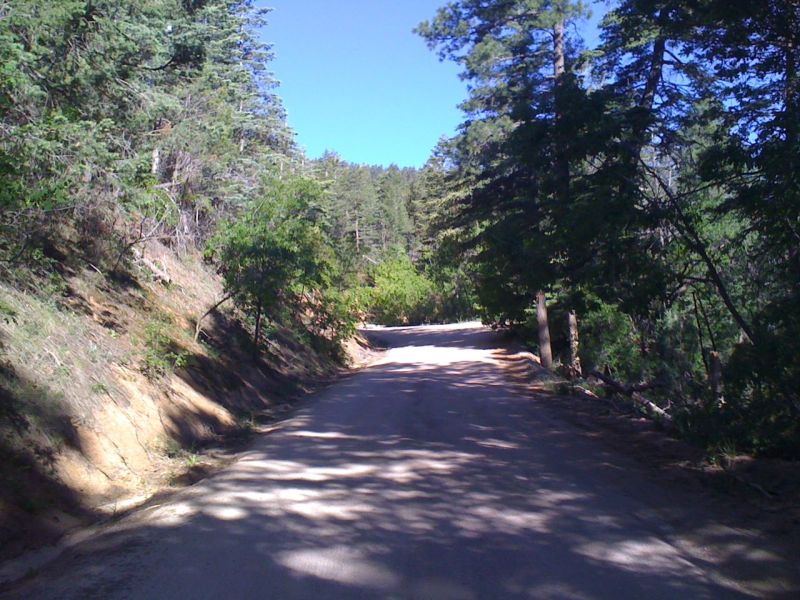 Day 4 – Grand Canyon – Kaibab National Forest
Woke up early just after the sunrise … rode with the kids in search of the Grand Canyon. I kid you not – we couldn’t find it! It was pretty obvious which way the canyon was, but all the trails that headed that direction (e.g., through the Shrine of Ages) had “no biking” signs. So we headed up towards another lookout but the kids were exhausted by this point, and the hill was kinda steep. I found out later on my mountain bike ride that we only needed to make it to the top of the hill to get to a nice lookout point. So we headed back down to the cafe for breakfast and then the kids walked over with Kristine and her parents to hike to a lookout. They promised me they would take me over there later, and I headed out on a 60 mile mountain bike ride through the Kaibab National Forest.
The trailhead was about 13.5 miles from the campground so I had a bit of riding on the road to do – but there wasn’t too much traffic, and the road was wide. Eventually I made it to the turn off which immediately turned into a dirt forest service road. After about a mile or so, I made it to the Arizona Trail trailhead which theoretically goes all the way down to the border of Mexico. My plan was to ride out 10-15 miles and turn around to get about 20-30 miles of singletrack practice. The trail was kinda cool because it went through different kinds of terrain. It rolled constantly on short ups and downs with only a few longer downhills and uphills. It was mostly non-technical in terms of boulders or roots, but the rocks and dirt on the trail was loose and the turns tight meaning the speed was kinda slow. I’m sure with more practice you could really fly through it.
After about 10 miles of single track I saw a double track road with a sign that said “bike route” so I left the Arizona Trail and headed on the double track which eventually turned into a forest service road. This road alternated between sections that were sandy and others that were quite rocky (basically a flatter version of the skyway epic course). So after another 10 miles of this, I was tired of getting beat up and turned around bypassing the singletrack and instead taking the forest service road all the way back to the main highway.
This time I stopped to climb the cool fire tower, which is no longer used as a fire tower but instead serves as a great lookout where you have an excellent view not only into the grand canyon but also the surrounding area – it was used as a fire lookout at some point in time so you’d expect it to be able to see for miles and miles in all directions – and I was not disappointed.

Arizona Trail trailhead entrance next to the Grandview Lookout Tower 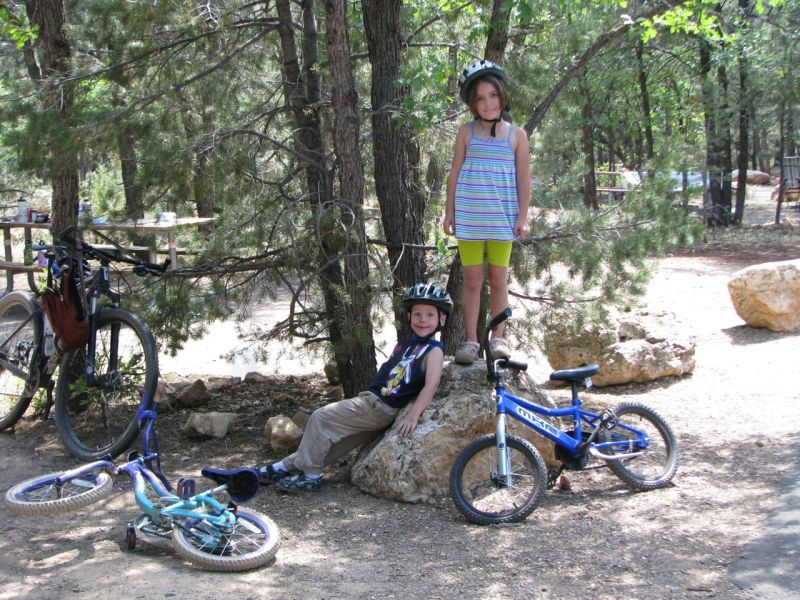