Yesterday, I had to run by the bike shop to fix a problem with my shoe. Thanks Bob’s Bikes for the quick fix!!! Jonathan at Bob’s is the fastest Specialized tension knob replacer on the planet. On my way home, I climbed up and over 12 ridges both large and small. It was a fun meandering commute, but one that I have done a few times now. Thought I would share the TopoCreator map of the ride.

Speaking of TopoCreator, at the risk of sounding like I am “crying wolf” since I have been “almost ready” with the new site for the past 2 years, I really am getting close to going live with the site. A good sign of this is that I am currently working on user management issues. Previously, I was just basically focusing on features and not worrying about users. Now I am trying to make the site robust enough to scale to many users. Look for an update soon with a link to try out the new site!

Update 3/25/11
I had to update this with a couple more maps I made yesterday and today!

First, this is the route that took me up and over 500,000 feet of climbing for the year today. I took it pretty easy on all the climbs except the Woodridge climb. Everything else was pretty mellow because I am racing this weekend at Tour de Tuscaloosa. A note about the route, it only crosses itself twice – once on the out/back portion of the Woodridge descent / climb and then again on South Cove because when I did the descent the first time a pick-up truck was driving the speed limit on the descent so I went ahead and did the Renfroe climb so that I could try the descent again – 57mph!

This commute from Samford back to my house took me up and over the 500,000 ft mark for the year!

The second map shows a zoomed in view of my last 100 commutes, which includes both my commutes yesterday and all the commutes back to the beginning of February. 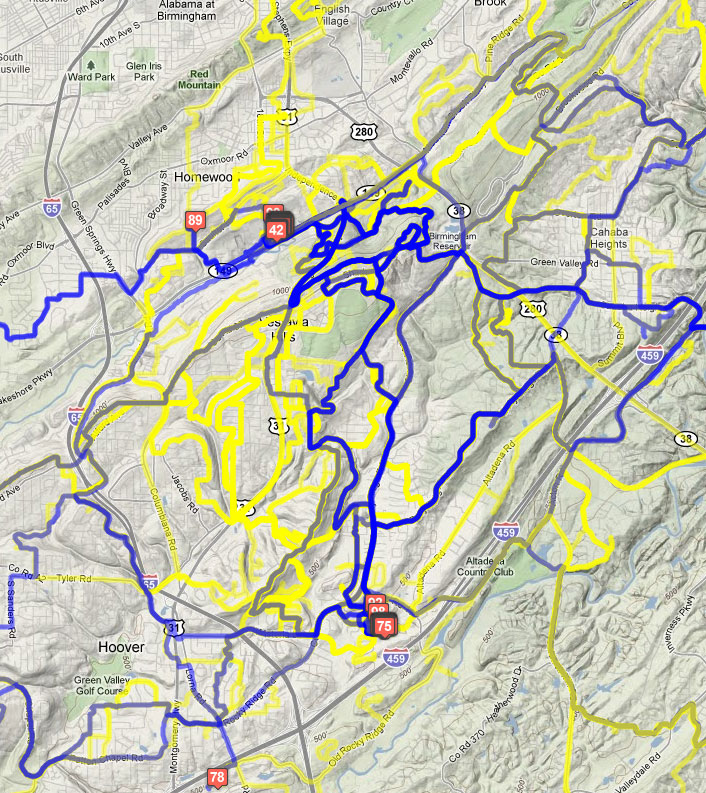 This final screenshot shows my standings in the Strava KOM challenge contest. I was the first person to reach 400,000 and 500,000 feet! 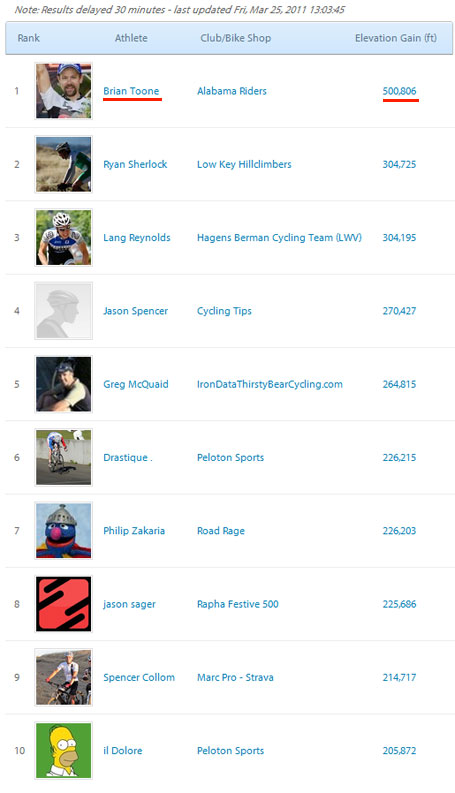