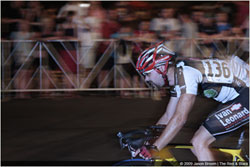 Athens Twilight I by cjbroom on deviantART

Wow – what a rush! It is so hard to describe racing 80 laps of a 1k course lined with 30,000+ fans screaming from the rooftops of buildings, inches from your face on the corners, and on every square inch of the course. You could hear waves of noise as you rode past certain sections of the course. Cameras flashing constantly throughout the course, the smell of cigars, cigarettes, and beer permeating the start/finish area and the hill on the backside of the course. And last but not least — speed, pure speed.

I started at the very back of the 150 rider field because I couldn’t take off from work to make it over to Friday’s computrainer grid qualifying race. So I knew that my strategy for the race was simple — pass as many people as possible as quickly as possible and at all times possible. The wait on the start line was somewhat excruciating with at least 20 riders called up one at a time to the front row. A rider would be called up, a small gap would open up where the rider was, and there would be a surge in the group to fill the gap and move up — keep in mind that this is all *before* the start of the race. Finally, shortly before 9:30PM, the fog horn was blown and we were off. Zero to 20mph in about 10 pedal strokes, slam on the brakes to a near stop in Turn 1, a crash that takes out maybe 15 riders in Turn 2, and a quick decision to keep on going around on the inside — so up the hill on Washington Street going from 9mph to 25mph by the crest of the hill and 35mph heading through Turn 3 at the bottom of the hill, slam on the brakes again for Turn 4 and then accelerate up to 34mph again through the Start/Finish. That was Lap #1. Within the first 30 seconds of the race, my heart rate had gone from 112bpm to over 180bpm.

The “excitement” of Lap 2 was hitting a pothole right after Turn 4 and hearing/feeling/watching my bottle sail out of my back water bottle cage and under the wheel of the rider next to me. Fortunately, nobody went down – but that meant that I was down to two water bottles, the one in my front cage and the one in my jersey pocket.

I stuck to my strategy and passed people as often as I could. I found that the outside of the course was the best place to pass people. There always seemed to be a hole even if pretty small that you could squeeze through. Still by the end of the first 10 laps, I couldn’t believe how hard it was and as I passed through the Start/Finish line hearing the announcer say “Oh – these guys may never see the front of the race” and “Look at the damage being done back here…” I thought that it was going to be a challenge just to finish the race. The next 10 laps seemed to fly by though at 1’15” per lap and before you know it we were 20 laps into the race exactly halfway to the halfway point (40 laps) of the 80 lap race.

By twenty laps, I had passed tons of people … but a lot of the people I passed were heading for an early exit out of the back of the group — so it still felt like I was near the back. Also, I could look up the road on the really fast laps and see the front of the group flying into a corner with all the other riders strung out behind in single file or two abreast and think “oh wow – it is still so far to get to the front of the group!”. I kept pushing though and there were a few laps were the group bunched up on the downhill going into Turn 3. I believe lots of people would sit up thinking that they could grab a few seconds of rest, but I knew that the benefit of passing people and getting closer to the front would far outweigh the few seconds of rest — so I would come out of the draft and surge by as many riders as I could on the outside as long as the hole stayed open.

By the halfway point of the race (40 laps), I had worked into the part of the field known as “the washing machine” about 40 riders or so back from the front of the group where riders are now battling for position not only to advance but also to keep from losing position. I kept on fighting to make it to the front though knowing that the safest, easiest place is as close to the front as possible. Finally, by lap 60 I had worked my way to just a few riders from the front of the group. A break of 5 riders had established itself with a 20 second gap on the field. On the climb up Washington Hill, I saw a rider attack on the leftside of the group so I drilled it as hard as I could to latch on thinking in my head that I was just pulling the field up — but I looked back and saw that we had a good 3-5 second gap and that the group was spread out. So I hung on for dear life as we took Turn 3 at 36 mph, managed to pull through at the Start/Finish line and then sat on for a lap as our break had swelled to 8 people and we were closing in on the break of 5 in front of us. I managed to pull through one more time before we caught the break with about 10 laps to go. Adrian Hegyvary (Hagens-Berman) attacked and only Mark Hekman and Heath Blackgrove (who won the Mississippi Gran Prix that we raced last weekend) responded. I was gassed and desperate for someone else to take up the chase, but nobody did and so our break only lasted a few more laps before getting swallowed by the field with 6 laps to go.

I fought hard to stay as close to the front as possible and managed to finish 27th in the race. I was ecstatic to not only have finished, but also to finish “in the money” (top 30 spots), and to have been a factor in the final outcome of the largest, fastest crit in the country!

Historic Roswell Criterium Report
With 150 riders again lining up for the start in Roswell, I knew that the race was going to be fast. I managed to finish 38th in the race, but I somehow blew very good positioning at the front of the pack with about 10 laps to go to wind up so far back in the sprint. This race course is a bit more technical than Twilight with a few narrower streets, steeper hills, and some sharper corners. I again had a pretty poor starting position near the back of the back, but managed to work my way up to the front with about 10 laps to go. The hardest part about this course is that the pack usually bunches up on the course’s main downhill — and it is very easy to lose 15 positions if there is a surge around the side of the pack. Your best bet is to be very vigilant and aggressive on this course. I’m still learning and can’t wait until Saturday’s race in Anniston and Sandy Springs on Sunday — vigilant and aggressive.

One response to “Athens Twilight and Historic Roswell Criterium Reports”