Camp Sumatanga is a Christian camp and retreat center located in rural Gallant, Alabama at the base of Chandler Mountain. The folks that run the camp have been so kind to let GSMR use their facilities for the start/finish of the annual training race series. Each year, close to 200 cyclists gather in late February for what is traditionally the first race of the year of the upcoming season.

This year, about 45 riders lined up for the “A” race, and the action started as soon as Bill Seitz said “Go!” with Travis Sherman (Tristar/Warp9 Bikes) taking off. I was closest to the front from our team (Tria Market/Ivan Leonard Chevrolet) so I set off in pursuit. I looked back and saw one of Travis’s teammates coming up to me and my own teammate Darryl Seelhorst rocketing up on the outside so I eased up to fall back to the pack and let Darryl join Travis and Mike Hurley (Alabama Masters/Bobs Bikes) on a three-man breakaway that defined the first half of the 50 mile race. With three of the major teams represented, the pace in the pack plummeted for the rest of the lap until near the beginning of the second lap when we saw that the break had dwindled to just two riders. This put Alabama Masters back on the offensive and there was a series of attacks. We took turns covering them content to let Darryl fight it out with Travis up front because we wanted the move to stick.

Then because the racing was starting to get fairly negative (i.e., slow). The Tristar/Warp9 team moved to the front and began drilling it not necessarily in full chase mode but definitely at a very high speed. With the crosswinds on the back side of the course, this put a number of people into “a spot of bother” as the gap to Darryl and Travis started to shrink. Also, there were individual riders that would attack which Tristar/Warp9 would respond to by sending a rider causing us to send a rider too. We covered all these moves well.

Then on the primary hill on the backside of the course, Mike Olheiser (Tristar/Warp9) attacked hard on the hill and I gave it everything I had to bridge up to him and then hang onto his wheel up to Darryl and Travis. We caught them right before the start of the fourth lap. Mike drilled it up the gradual climb just past the start/finish line at a pace that only Darryl and I could keep up with. This meant that Mike was outnumbered and therefore had to stop working with Darryl and I. So we had a few discussions trying to figure out what to do. One option would be for one of us to go with Mike to even out the break and for the other to drop back to the pack. The other option was for Darryl and I to ride tempo and see if we could stay away with Mike sitting in for the finish. I was leery that Mike would put in an attack to drop both of us when we were tired so we couldn’t really ride a fast enough tempo to stay away from the group and it all came back together a little before halfway through the 4th lap. There were some shortlived attacks that didn’t go anywhere.

Then just before the start of the 5th lap, Mike Lanham (Tristar/Warp9) put in an attack that Wes covered. The two of them started to put time in the field when Travis Hagner (Tristar/Warp9) attacked to see if he could join the break, too. Darryl covered this move, but decided with the effort that he had put in the break from earlier that he wasn’t going to work with Travis. So they came back to the field right about the start of the 5th lap. We had a pretty fast pace up the gradual hill on the start of the 5th lap and then Mike O attacked super hard just after the top of the hill. I was right there so I latched onto his wheel and we had to work together to catch up to Mike and Wes. Shortly before the last turn, Mike Lanham put in an attack that I covered. Then Wes attacked taking Mike Lanham with him. I looked at Mike and said I was happy to let the two of them sprint it out.

He agreed and we had a running commentary going as we were able to watch them cat and mouse their way to the finish. In the ensuing sprint, Mike Lanham was just able to outsprint Wes (by less than a wheel from what I hear). We didn’t see their sprint as we had our own to deal with. Shortly before the finish the pack had closed the gap enough that I had to pick up the pace and lead out the sprint. Mike came around me at the line to take 3rd. Sammy was in good position for the field sprint but then cramped just before the finish. Next week!!!!

So this week we settled for 2nd and 4th behind Tristar/Warp9’s 1st and 3rd place finish. All-in-all a good start to the racing season with a strategic tactical race, lots of lessons learned, and a bit of hard riding mixed in. Here’s my topocreator map of the course, elevation profile, and heartrate/power data. 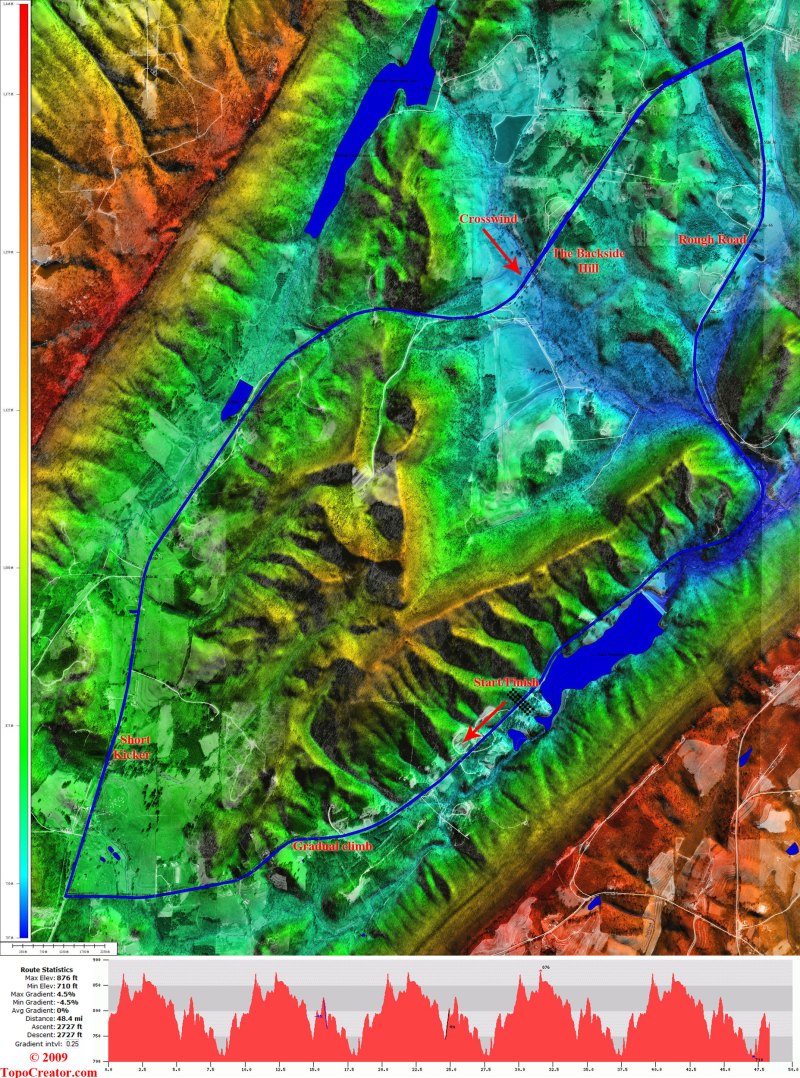 I had my longest training ride of the year today. Kristine was meeting some friends in Chattanooga for a lunch get-together, and my parents had volunteered to take the kids for the night – sooo what’s a crazy cyclist to do … bike to Chattanooga!!! That was the plan, and it went pretty well but I ran out of time and daylight and only made it to Rising Fawn, Georgia about 20 miles short of the goal! I had a tailwind for much of the ride and averaged close to 22 mph for the first 4 hours. Here’s a map of the route, some pictures I took along the way, and my HR/Power data. 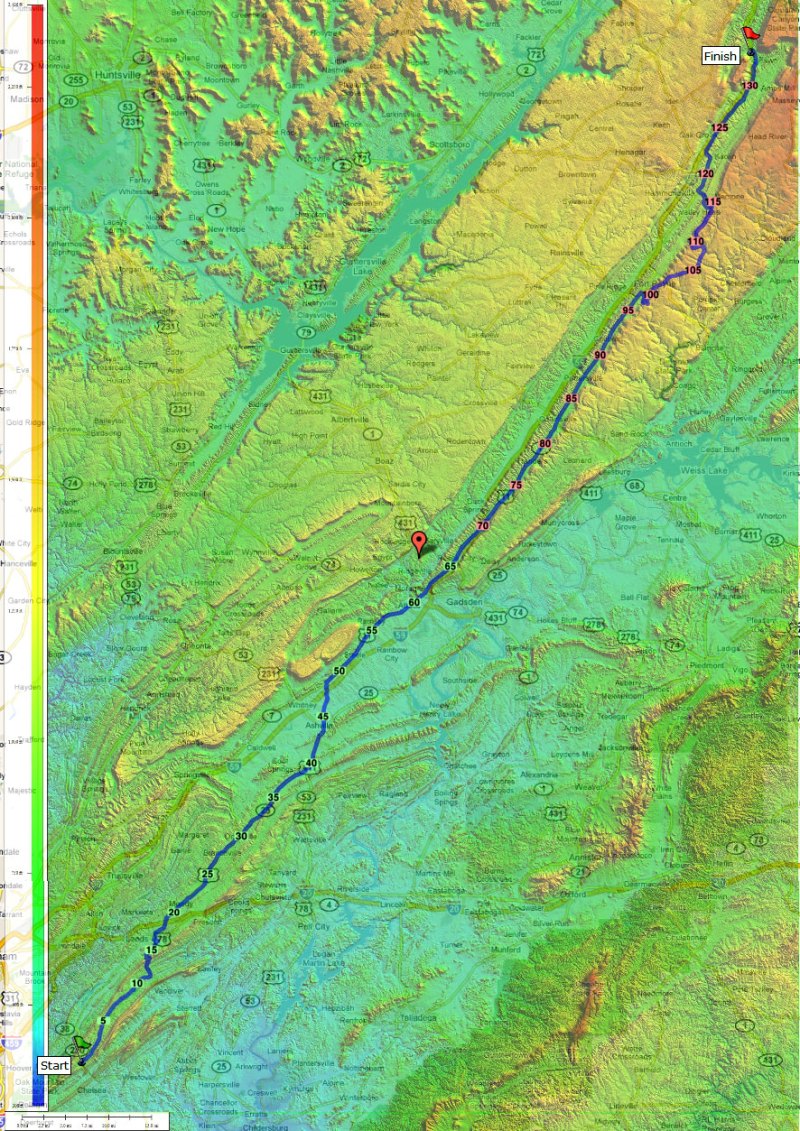 To put everything in perspective, I had a tailwind for a good part of the ride and I still didn’t even make it the distance that they race in Paris-Roubaix! And I didn’t have cobblestones to deal with, although there was one part of US 11 in Dekalb County that was pretty rough.