The details: I had a great warm-up and was feeling very good with my TT position on my road bike. My TT bars were far enough out that I could stand comfortably without hitting my knees. One downside is that I had to slide very far forward on my seat in order to have my arms at the right angle. Still, I felt great and felt like I was putting a lot of power into the pedals on the hills as I was warming up.

As I rolled up to the start line, I could see the storm clouds slowly moving in. I was one of the last starters so it was quite a disadvantage since a good majority of the field got to ride it in dry conditions. Five, four, three, two, one and right as I took off the thunderstorm hit with a torrential downpour, a little thunder and lightning, too. This normally wouldn’t have been so bad, except that the heavy rains obscured the cracks, uneven pavement, and potholes. A few times I almost fell and each time I scrubbed speed to make sure that I didn’t fall.

Even with all of that, I was having a bad TT but it wasn’t the worst in the world until I tracked right into “the river”. Yes, the rain was so hard that it had created a virtual river running down the righthand side of the road on one of the steeper climbs. I didn’t see it in time and ended up riding straight into it, nearly falling, and having to slow way down in order to get out of it and back onto the part of the road that didn’t have a river in it. Then at the bottom of the next downhill was “the lake” where enough water had pooled on top of a narrow bridge that it formed a lake that you came flying into at 30mph, huge splash, but kept it upright. Finally, a very sketchy 35mph downhill to the finish line, with potholes, uneven pavement. Nasty, cold, epic. Here’s my HR and power data for the ride:

In summary, I went out way, way too hard averaging almost 580 watts for the first minute, dropping to 421 watts for the next minute, 381 watts for the third minute, 324 watts for the fourth minute, and then averaging only 342 watts for the rest of the TT. Even then, the only reason I was able to manage an overall average of 363 watts is because I was still able to crank out some wattage on the steeper climbs. Hopefully, that means good things for tomorrow’s 104 mile road race.

1300 miles of driving through 9 states and we have finally made it to Fitchburg, MA. We swung up through Nashville to pick up a U-Haul trailer and load it up with not one, not two, but about 30 bikes for all the juniors, pros, masters, etc. riding for Tri-Star. Check out our travel map: 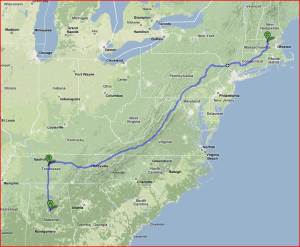 After we pulled into the dorms at Fitchburg State College, we unloaded the bikes and took off up the road to find the TT course. We found it and had a chance to take a look at the course with some nasty potholes and cracks. The course is mostly uphill for the first 5 miles and then mostly downhill for the last mile. My start time tomorrow is 5:38 PM. Plenty of time to hit up a coffee shop in the morning to check email and get caught up on some work. There’s so much I could write about our trip up, from the beautiful mountains to how crazy it is to drive a GMC suburban pulling a very large and heavy U-Haul trailer for 1300 miles – but instead I’ll just describe one experience which was a highlight for me so far. We had just crossed a large river (the Hudson, maybe?) shortly after entering New York state from Pennsylvania and we needed to stop for something to eat for lunch. I was driving and I saw an exit with a couple of options and pulled over. We ended up at the Hometown Deli and it definitely had the atmosphere of a very authentic New York deli — lots of options with Boar’s Head meat and a buffet spread that had things on it that I feel like the locals would have recognized, but I had no idea what they were. The people there were actually nice, but we must have sounded funny with our Southern accents. I settled on “stuffed shells”, and they were very good. Ok, that’s it for tonight. I am off to bed! No wireless here in my room so I’ll have to post this in the morning from a coffee shop.