Quick summary: cold, rainy, miserable, but I survived to race another day. 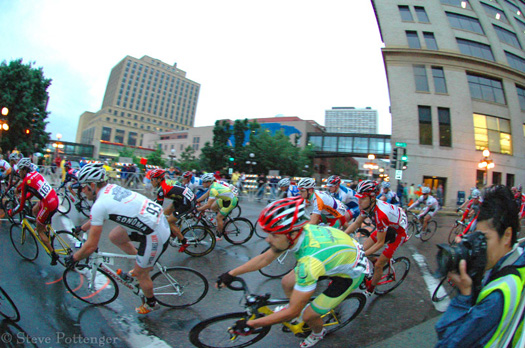 The details: I made it 11 laps after a starting position about 30 riders from the back of what the announcer said was a 200 man field (I think the actual field size may have been somewhere in the range of 150-175 people). It was raining and 58 degrees at the start, and I basically had no hope after getting a starting position that was near the very back of the pack. The pace wasn’t that fast, but I found it nearly impossible to pass people on the six-corner course because there was only
one line to take through the corners and the race stayed single-file for the whole time I was in it! I also wasn’t passed by very many people though and I think I was about the 30th person to get pulled which was about where my starting position was in the pack.

Initially, the announcer made it very clear that the riders being pulled who hadn’t made it to the halfway point in the race would not be allowed to start the next day. But all of that changed when the lead motorcycle wiped out on one of the corners and the race was neutralized. Before restarting the race, the chief referee asked the riders if they wanted to continue, and with one voice, everyone still in the race shouted “NO!” as it continued to pour down rain in 58 degree weather in the middle of June! So they scrapped the race, donated the prize money to the Children’s Hospital, and said that everyone would be allowed to start tomorrow – even those of us who had already been pulled from the race. Whew!