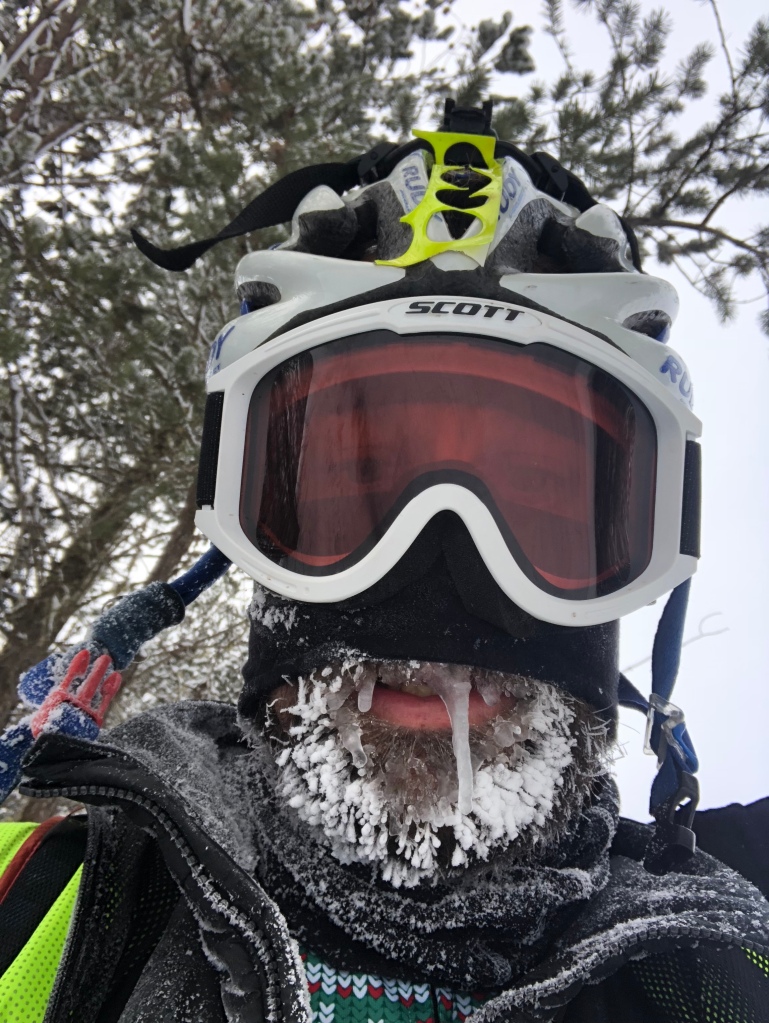 Ice beard less than halfway through the ride.
Fun adventure in the north woods of Northern Minnesota today. I rode from the lowest point in Minnesota (Lake Superior, 603′) to the highest point in Minnesota (Eagle Mountain, 2301′). It was a tough ride with lots of uncertainty. I had attempted this same ride in 2016, but failed. In 2017, I was hit by a car a month before our Christmas trip and was still on crutches while the rest of the family went skiing. This year, I had set aside a day to forgo skiing and try this same ride again, but this time a bad winter storm was bearing down supposed to hit about the time I made it back to the cabin. Lots of uncertainty – the only thing in my favor this year was warm temps in the teens, but that was actually a problem as I sweated a ton and had one water bottle for an 8 hour ride.

Highs and Lows
I have been on some fun adventures on the bike over the years. Here’s all the state high points I have climbed on my bike in reverse order of when I climbed them.

2016 failed attempt
In 2016, I was thwarted by lots of snow and a late start after skiing half a day. I made it to the start of the trail at sunset (without a light) only to find the trail covered in half a foot of new snow from the day before plus who knows how many feet of snow under that. I tried to ride the first few feet and slid out and decided it just wasn’t going to happen. I made it home well after dark (almost 7pm). I vowed to come back the next year and start earlier in the day and take a light. Here’s a timelapse video of the first 9 miles of the ride before my battery died in the cold.

2017 crutches
In 2017, I was recovering from surgery on my foot after being hit by a car traveling 45-50+mph on a county road south of Birmingham. I was going 13mph up a hill at the time of impact. Very, very thankful that my worst injury was a torn-up foot. I impacted the car’s windshield which acted like a cushion and saved my life. The damage to my foot came afterwards sliding alongside the road after the driver slammed on his brakes. I have no memory of the collision or aftermath. My memory from before is spotty, too, the only thing I specifically remember is stopping at the gas station in Sterrett to buy gatorade about 10 miles before impact. I was on crutches while the family went skiing.

2018, success!!!
Our plan for this year included three days of skiing, but we only bought a two-day pass for me so I could try this ride again. The weather forecast for Lutsen down on the lake was for a temp in the low teens rising to the 20s by the afternoon with a big winter storm coming. 12-18inches of snow predicted with wind gusts blowing to 35mph starting by about 4:30PM. My worst case scenario would have me back to the cabin by about 4PM, so I thought I was safe.

Ice falls at the top of the first plateau step 750′ above the lake.

The dirt road is plowed through the winter, but not as thoroughly (or as frequently) as the paved roads get plowed. They leave a layer of snow probably so that the plow doesn’t mess up the rocks and gravel underneath the snow. The resistance that even a thin layer of snow can add to a fat bike is amazing. I could experiment with this as the amount of snow varied from place to place and there were a few places where you could see down to the frozen dirt – this was noticeably faster and easier than sections that had maybe 1/4 to 1/2 inch of snow.

Somewhere through this section, I realized my Garmin 1030 had drained down to 36% battery after just an hour and a half of riding. I forgot to bring a micro-usb cable and had the sinking feeling I would need to record the second half (or more) of the ride with the iphone Strava app and then merge the first part from my Garmin. But I also remembered that I have switched around cable locations quite a bit on this trip, so I was holding onto hope that I would find a micro-usb cable buried in my backpack. When I made it to the Eagle Mountain trailhead 25 miles into my ride, the Garmin was down to 9% battery. I dug around in my backpack and thankfully found a micro-usb cable, but when I plugged it into the Garmin nothing happened. I tried all sorts of things including powering off and powering the Garmin back on to see if that would get it to charge, but no luck. I had a hunch that it might be the cold weather keeping it from charging so I opened one of my hand warmer packets and stuck it up against the Garmin while I continued doing all the other things I needed to do before tackling the trail. Lo and behold a few minutes later, the Garmin was miraculously up to 17% battery already and would continue to charge all the way up to 98% by the time I made it back down from the summit.

But before all that, after messing around with the Garmin, I switched into my nice winter hiking boots that I had carried with me in my backpack and put my winter mountain bike shoes back into the backpack. This was good because my feet were getting really cold and exposing them to air very briefly and getting extra blood flow down into my toes would help. Also, I knew that the trail would involve a lot of hiking and clipping in/clipping out so I thought I would avoid all that just by using my hiking boots. I took the ice beard selfie at the top of this post and ate a big chocolate/nut covered donut we still had leftover from the Donut Vault in Chicago. Then I headed to the trail.

Eagle mountain summit trail … 6 miles of this round trip was really hard!!!

The trail was surprisingly rideable and grippy from all the hiking on it. I didn’t see any other fat bike tracks, but it looked like a lot of people had been hiking on it. From the yellow snow I saw occasionally, it looked like someone had hiked on it very recently. The tiny beaten down portion of snow was walled on either side by a lot of firmer snow that would bounce your tire back into the track if you went off course. There were some snow covered rocks and roots that you had to be careful with but you could anticipate which way it would shoot your rear tire if you pulled the front tire up on top of it. This was really fun, even though I did have to step off into the snow numerous times where I didn’t get it right or the turns were too tight to clear on the bike. Also, some of the uphills you could ride, even some that were steeper than I imagined would be possible in the snow, but some of them were just too steep or had sharp turns in the middle of the hill. I had to talk these which was tricky to fit me and my fat bike in the trail.

The entrance to the boundary waters area was about a mile or so into the trail, and this particular boundary was right at the first creek/marsh crossing. These were tiny bridges with running water under some of them – not sure if that was because of warmer than usual temps, or from natural springs close by. The trail made it to Brule lake where it followed the lake and became quite rooty and unrideable. At the end of the lake, you made a left turn and started a steep climb to the top gaining a few hundred feet in half a mile. I decided it didn’t look rideable at all so left my fat bike down at the base and hiked the rest of the way to the top.

There was a clearing near the top where you could look out and see all the way back to the Lutsen mountains where I started from. The top itself had a cool historical sign explaining the high/low point connection and also included a historical note that Eagle Mountain wasn’t recognized as the highest point in Minnesota until a 1961 survery to correct an earlier barometric pressure device reading from the 1800s on a nearby hill.

The return trip was pretty straight forward and a bit faster. It was generally downhill, but I was pretty tired by this point and downhill in the snow on a fat bike isn’t particularly fast or easy. I started out just trying to ride in my hiking boots all the way back but it made it difficult to stand on the climbs. So I stopped at the Caribou Trail intersection and changed back into my winter biking shoes. I had run out of water at the Eagle Mountain trailhead because it was warmer than I had anticipated and the fat biking through the trail was really hard work so I sweated a lot. Thankfully, I had plenty of food though to stave off a bonk late in the ride, so I was able to end on a high note and make it back to the cabin by 4pm just a few minutes after my family had made it back off the ski slopes.

A note about cars – I got passed by 20 cars on the mile or two I had to ride on MN-61. Then I didn’t get passed by any cars at all for nearly 40 miles where I got passed by a few cars on the descent off the plateau and then a few more cars on MN-61 although it was quieter with the storm moving in. I was passed by a bunch of cars on the climb back up the resort with everyone trying to make it to the resort to check-in before the storm hit. The storm itself was moving slower than anticipated and is just now hitting us with lots of snow as I type this up near midnight.

The cars per minute ratio on this ride was 0.1, whereas my normal rides around Birmingham average about 50-70x that amount!!!