Two years ago, there was an email about a bunny that needed a home. I replied that if they didn’t find a home by the end of the week, we would gladly take it. Well, on Friday of that week, there was a knock at the door and I was handed a beautiful lionhead baby bunny. As the owners turned around to leave, I asked if he had a name and they said they had been calling him Fluffy Steve. I said, “that’s perfect”. I was home alone, but Kristine was going to be home in a little while so I just sat on the couch holding the bunny. She (we found out later Fluffy Steve was a girl instead of a boy as the original owners had thought) sat there and licked me (which our other bunny doesn’t do very much). The upper left pic is right after I handed the bunny to Kristine after she got home from work that day.

We hoped that Fluffy Steve would be best friends with our other bunny, Jaggy. It was not to be – we tried several times to bond them, but they would just fight. Bunnies don’t always get along with each other, and when they don’t – it can be pretty violent. Eventually, we came up with a solution. Fluffy Steve would be Analise’s bunny and live in her room. The top right pic from the collage above is Fluffy Steve on Analise’s bed. The bottom left pic is a selfie Analise took of her and Fluffy Steve. Analise bonded with the bunny, but it wasn’t just Analise that the bunny loved – anybody who came into her room would receive tons of bunny kisses after Fluffy Steve would bolt out from under the bed to see who it was.

That only leaves the bottom right pic, which Kristine took early yesterday morning while she was still snuggling the bunny on the couch having spent a good chunk of the night and morning with her.

This went well for the next couple years with one exception – Fluffy Steve would occasionally be quiet and not eat very much. We thought it was gas because when we gave her gas drops she would usually perk up and start eating again and be back to her normal self … until last month. She stopped eating and would stay huddled in the corner. We took her to see Dr. Atlas at Riverview and he found an infected tooth. We started antibiotics and pain medicine and she seemed to get better for several days at a time before reverting back to not eating and not moving much.

We took her again to the clinic, and the tooth which had cleared up after the first round of antibiotics had gotten infected again along with the others next to it. Dr. Atlas did an X-ray and saw that the infection spread throughout her entire jaw. There was nothing we could do – the last ditch attempt to save her would be a very expensive surgery that would involve removing all her teeth and then using antibiotics injected directly into the jaw where the teeth used to be. Dr. Atlas recommended against the surgery given that she probably would not make it through it, and even if she did, the problem would come back again.

Kristine held and snuggled Fluffy Steve most of the night Wednesday night.

So with no other option, we were going to continue to force feed her through a syringe and give her lots of pain medication until it was clear that it was time to put her to sleep. We imagined at least a week more with her, but that very night she went downhill quickly and would not eat anything and ground her teeth together constantly while sitting huddled and shaking in the corner. The problem with bunnies is that their digestive system is wired to digest a lot of food all the time. So if a bunny stops eating, it takes very little time before other complications arise. So yesterday, we took the kids out of school and went as a family to the vet to have her put to sleep. It was sad. I cried. 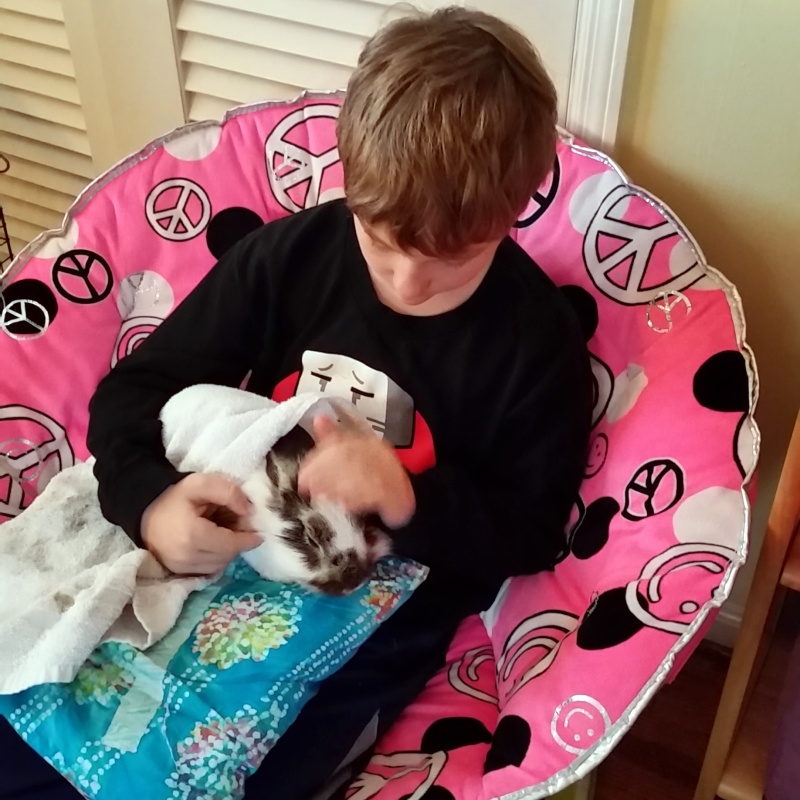 After we got the bad news from the vet on Wednesday morning, there was no way I was going to ride. I had been planning to ride on Thursday, but when it was clear Wednesday night even that Fluffy Steve was in a lot of pain, riding was out of the question on Thursday, too. So today I wanted to do a long ride that I would name the Fluffy Steve memorial ride. As it turns out, it snowed off and on during the ride so I’m imagining the snow as Fluffy Steve up in bunny heaven shedding her fur already and the rain mixed with my tears missing her.