Yesterday, I was able to everest Karl Daly in just under 19 hours doing 57.5 repeats. The exact everesting spot where I hit 29,035 feet of climbing is visible in this pic down near the telephone pole behind me, but I didn’t think it would be right to do so many repeats of Karl Daly without once getting a picture of the Manatee mailbox halfway up the climb. So Chris Shelton took this pic of me next to the manatees dressed up for Thanksgiving. How did I get to this spot? Let’s back up a couple weeks…

Clingman’s Dome Attempt
Each year, my regional chapter of the ACM (ACM Mid-southeast) holds a computer conference for students and professionals in Gatlinburg, Tennessee which sits at the foot of Clingman’s Dome — the highest point in Tennessee and one of the largest climbs on the east coast. I’ve always included some sort of epic ride on Saturday following the conference, but this year I decided I would attempt an everesting of the climb, which would require about 5.25 repeats of the climb. The only problem was an unusual cold spell was dipping the temps down into the low teens. My everesting attempt was on a time schedule (i.e., my wife and I had to be back to Birmingham by a certain time early Saturday evening).

So I started my everesting attempt at 1 in the morning after just 3 hours of sleep. With temps dipping down to 12 degF shortly past Alum Cave, I was struggling with the cold by the top of the 2 hour climb unsure of how I was going to make it back down. It really was far too cold to have even attempted this … my camelbak, food, and my body were all frozen by the bottom of the descent. The logistics of trying to do this in this weather is really crazy. I had to wear my sunglasses in the middle of the night to keep my scarf over my nose, and my hands were so cold I had to do the descent one handed alternating hands with one hand “drafting” behind my back to get it out of the wind. Needless to say, the descent was not only dangerously cold, it was also dangerous! It makes me appreciate the difficulty of climbing everest with all the equipment and trying to keep warm and still access food, drink, etc… 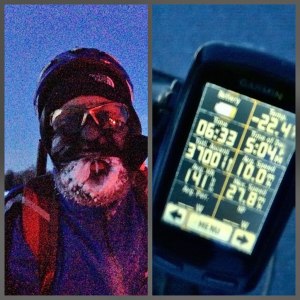 Let it be said that I’m no stranger to cold (see the picture above from Wisconsin and my blog post about the Rapha Festive 500 competition), but riding slowly through the snow on a mountain bike with hourly stops for coffee, etc… is very different than descending at 30-40 mph for 45 minutes with no place to stop to warm up!

The very next day after returning back to Birmingham, I ran into a good friend of mine Mark Fisher who was out climbing over in Bluff Park. We decided to finish out the ride together during which we tried to figure out the best climb in Birmingham to everest. By the end, it was pretty much decided that Karl Daly would not be the easiest since it was a pure climb with no descents, but it would probably be one of the safest.

Official Karl Daly Everesting
Ben Lowe, the developer of veloviewer.com, partnered with the folks behind the everesting movement and created a map of all the everestings of climbs around the world. He has put together a holding area for riders to submit their everesting attempts, which then get reviewed to see if the attempt followed all the rules. Once the everesting has been vetted, it gets added to the worldwide map along with a page with all the details and comments for the ride. Here’s the link to the updated worldwide map, plus a link to the page created for my everesting of Karl Daly.

Statistics
I’ve created a table of all the stats that I find interesting from this endeavor.

The Details
The statistics don’t tell the full story, so I’ve saved the longest section for the end — the details. Let’s look at average temperature, for example. Monday was an absolutely beautiful day with temps warming into the mid to upper 60s. It was the perfect day for an everesting. So how did the average temperature end up being 45 degF? Well, I only enjoyed that beautiful weather for about 6 laps (2 hours). Then the temp started plummeting quite rapidly. By 8AM the next morning when I was finishing everything up, the temps had been in the mid 30s for several hours – thus the 45 degF average temperature.

On Monday’s, I bike into work to teach one class at Samford — Software Engineering. After class, I had volunteered to proctor an exam for a colleague, which lasted until 10:15AM. I left work about 10:30 and arrived home at about 11:15, having already ridden 16.8 miles and climbed 2,181 feet. My wife was leaving with the kids for Thanksgiving with her family in Northern Indiana near the border of Michigan. I still had to teach two more classes on Tuesday before the Thanksgiving break, so we decided it would be better for everyone if she got to spend a couple extra days in Indiana while I stayed home, everested a climb, and got some work done during the holiday.

Leaving now for everesting right as the family heads up to Indiana. Loaded down with lunch and my stuff, be at Karl Daly in about 45 minutes.

I wanted to see Kristine and the kids off and help them finish getting everything loaded in the car, so I didn’t even leave to ride out to Karl Daly until about 12:15. I took the shortest, flattest route out to Karl Daly since I was carrying 16 pounds of food and equipment and still rode 14.8 miles and climbed 1083 feet to make it all the way to the start. That brought my grand total for the day up to about 30 miles and 3000 feet of climbing even before starting my everesting attempt of Karl Daly.

The weather was absolutely beautiful, though, so I was ready to tackle the everesting fully confident that it would be no problem at all. I ran into Geoff Leonard at the bottom of the climb and stashed my backpack full of stuff behind a tree. He snapped this picture of me as I was taking pictures of my Garmins at the start: 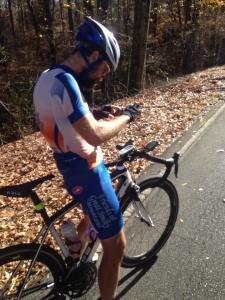 At the start – mile 0, feet climbed 0 – photo by Geoff Leonard

Geoff rode several laps with me, during which time we noticed somebody else doing repeats. It turns out that it was Mike Flowers’ good friend and roommate Matt Finnemore, whose goal was to do enough repeats to climb 10,000 feet in a single ride. We were riding at different paces, but it was great to catch up to him every now and then and see how far he had made it and also relay my own progress. On our second lap together, Louis Pfau arrived with his van that he parked at the bottom. He wanted to try to hit 15,000 feet of repeats while I was doing my everest attempt. Also, at the start of that lap I ran into Terri Jones who dropped off gels for me. Then shortly before or after Geoff left — already my memory is starting to fade — Luke Caldwell made it out there. He rode with me for a few hours climbing close to 5000 feet. During that time, Chris Shelton stopped by and did a couple repeats with the plan to return about 4 in the morning to do more repeats. At the time, I was concerned that I might already be finished by that point. Little did I know how wrong I was!

By the time Luke left to go home with the plan to return around midnight with coffee, it was starting to get dark. I think I did one lap by myself and already was starting to realize that my pace was nowhere near on track to finish by 4 in the morning. I had planned on 16 minute laps, but my time had already slipped to 18+ minutes per lap. Almost immediately after Luke left, Jason Kellen arrived and we rode a few laps together. Sometime during that time, I told him that I was only 75% confident of being able to finish. It was starting to get cold, and I was starting to get tired having barely made it to 3000 meters of climbing with nearly 6000 meters left!

Not too long after Jason left, Mike Flowers arrived and rode with me for a good long stretch. He brought a Starbucks coffee and a big piece of Starbucks banana bread. That jolt of caffeine and calories made a world of difference, and I was already feeling much more confident after only a few laps with Mike. Also, Jason returned with a bag of chips and payday candy bar. I ate the chips on one of the next laps, but saved the payday for later reserving it as an emergency measure should my energy levels really start to go downhill. Mike rode for several hours, and during that time Matt made it up to 10,000 feet. A few laps later, Mike called it a night.

Louis was still going strong towards 15,000 feet and shortly after Mike left, he and I rode together for a lap or two before our paces split us up again. I continued on for a few more laps before Luke made it back with some coffee and ready to ride with me for a couple more hours. Then at about 1AM, Louis reached his limit and decided to head on home leaving his car for me to continue using as a resupply point. By 2AM, Luke was ready to head back home. From 2 until about 4:30, I was by myself battling the increasing cold. My pace had fallen to 20 minutes per lap – over 5 minutes slower than when I first started.

Sometime between 4:30 and 5, Greg Caldwell (Luke’s dad) rolled up and joined me. A lap or two later, Chris Shelton made it back out there. As the sun started to come up, it dropped a few more degrees down into the mid 30s. Greg had to leave for work, but Chris kept rolling with me until the very end when I hit the required 29,035 feet of elevation. I do a lot of climbing on my normal rides, but I favor routes with lots of variety and usually try to find the rolling hills instead of the standalone ones. For this reason, it was easier for me to visualize the elevation gain from above sea level. Several times during the night, I imagined that I was 15,000 and 20,000 feet above sea level looking down far below at where I started. Also helping that visualization, was a set of 10 images/screenshots I made that captured what it looked like at the corresponding elevation on a route from sea level in India all the way up to the top of Mount Everest. I posted these pics to instagram along with a screenshot of my Garmin and a picture of who I was riding with and/or what the Karl Daly climb looked like at that elevation. Here are all the pictures side-by-side (hover over each one for a caption).

What’s next? Well, the goal is Race Across America, and this is one of many adversity training rides where I am stretching myself both mentally and physically to the limit and seeing how well I can respond and continue. More immediately on the calendar — the gravel grovel ultracx series finale race near Bloomington, Indiana on Saturday.

Let me end with a huge thanks to the following people: