As if this race could not get any more epic, throw in three hours of light to moderate rain with temps in the mid 40s degF, lots of mud and gravel, and there you go – even more epic. Now if we would only do an extra lap or two, you’d probably have one of the closest races to the Hell of the North (Paris-Roubaix) that you can get this side of the Atlantic Ocean. Think about it, the race is a balancing act between the wind, the echelons, the potholes, the gravel, the hills, and the many twists and turns of the course. The only thing missing is the cobblestones and the 150 mile race distance.

After the race – my Martindale 6.0 wheels were the perfect wheel choice for this race. Excellent in the cross-winds, headwinds, and tailwinds. Plus, they roll really well and no joke these wheels are probably the reason me and Patrick were able to bridge to the break and also how I was able to catch David Novak late in the race. 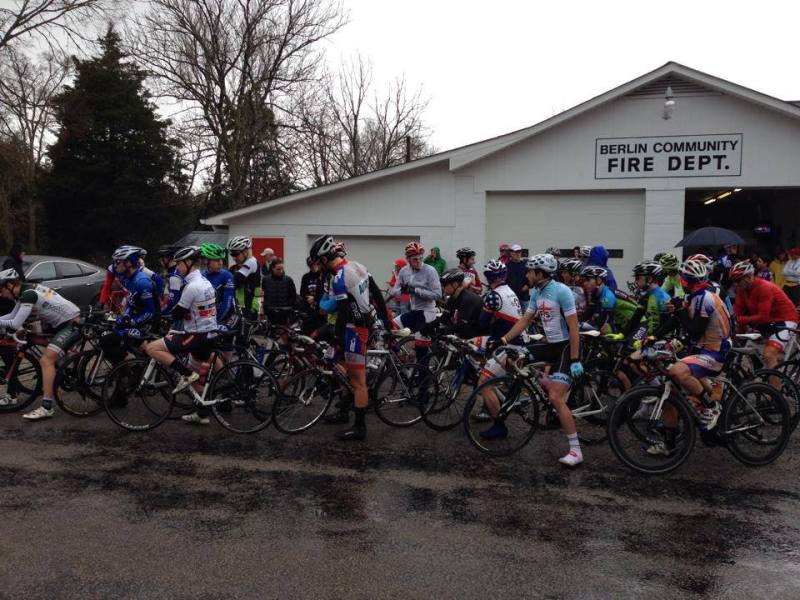 Before the start of the 2014 Hell of the South – pro-1-2 field, cold and wet! But not dirty yet. Photo credit: John Dershem

The Extended Summary
I started at the back, missed the 5-man move after the gravel, attacked on the hill a couple miles later, made it about halfway to the break before Patrick Walle (I AM Racing) bridged up to me. Together we finished the bridge up to the break to make it a break of seven. We completely buried it to make it up to the leaders, but it still took us 10 minutes (4.5 miles at the speeds we were going). This was all about 10 miles or so into a 70 mile race, so we ended up rotating well for the next 50 miles before the attacks started.

Eventual winner David Novak (Kelly Benefits) rolled away with Ryan Shean (Texas Roadhouse). Tanner Hurst (Cumberland Cycling) and I bridged up to those to make it a lead group of 4. We rolled it hard but the 3 behind us caught back up again. A mile or two later, David attacked again. I figured we would roll together back up to him, but after I finished my pull no-one else came around so I drilled it hard and chased David for the next couple miles (seemed like an eternity). I recovered on his wheel for half a mile before the two of us started working. We killed it and had 30 seconds on what was now a chase group of just three. With 2 miles to go, we started to slow down trying to figure out the sprint. I ended up on the front going very slow waiting for him to attack. But when David attacked with 400 meters to go, he caught me by surprise even though I was trying to anticipate it – and I couldn’t grab his wheel fast enough or bridge back up to him.

Tanner took the sprint behind for 3rd with Ryan and Patrick in 4th and 5th. Kudos to Justin Lowe (Low Country Cycling) and David Carpenter (VW Volkswagen) who both rode a strong race but got caught out by the attacks late in the race. What an epic race! With the cold rain in the 40s degF, mud, and gravel it had everything you could dream for in a spring classic!

The Details
I decided to drive up this morning to the 9:50AM race start in Lewisburg, TN since this is within about a two hour drive of Birmingham. By the time I had made it north of the city, it was raining again. This was a bit problematic given that I had not left myself a lot of leeway for making it to the race on time. I got lots of practice negotiating a good line trying to find the strips of pavement where the water wasn’t pooled. I also nearly ran out of gas b/c I was heading into a strong headwind which blew my calculations for making it to the cheap gas. I arrived with 0 miles to empty.

The temp was dropping along the drive and continued to drop after I arrived. So I opted for a warm-up consisting of sitting in the car and blasting the heat instead of rolling around in the rain. I didn’t roll to the start line until nearly start time so I started at the very back. I remembered last year that it was crazy moving around in the pack and dodging potholes so I stayed at the very back of the group and gave myself some room to dodge the rain-filled bottomless abyss potholes. Still, I knew that I needed to move to the front at some point and waited for the race to string out and gradually work my way up. It didn’t happen though until the gravel where I moved up a bunch of spots and then continued to move up after the gravel.

It wasn’t far enough, though, and a strong move of 5 riders – David Novak (Kelly Benefits), Tanner Hurst (Cumberland University), David Carpenter (Village VW), Ryan Shean (Texas Roadhouse), and Justin Lowe (Low Country). This represented several of the larger teams so I knew it had potential. I was too far back to attack until the long hill on Rock Springs Rd where our group strung out. It was into a stiff headwind so I figured I would either drag the group back up or maybe get a second break going. I didn’t imagine getting away solo. Still, I was committed to so I drilled it up the steep part of the hill hoping to close as much of the gap as possible to the lead group before the rolling downhill.

I reckon I had made it halfway there with still 10-15 seconds of a gap left when I started to lose ground. Fortunately, I looked back and saw that Patrick Walle (I AM Racing) had also gotten away from the group. I eased up a bit so that we could combine forces and together we drilled it to try to catch the leading group of 5. Looking at my heartrate data, it looks like the total bridge effort only took 10 minutes with an average speed of 26.2 mph, but it seemed like an absolute eternity.

By the time we finished bridging up the leaders, we got a time split from the moto ref of 1 minute to the field. I knew we had a strong group, but I wasn’t sure we could hold that for the next 60 miles. Apparently everyone else thought the same because we continued to drill it and rotate well in the strong cross winds. It was difficult to echelon in the wind because you couldn’t just choose a position on the road – you had to scan ahead for potholes and then pick your position based on the least flat-inducing path. Soon our lead had ballooned to 3 minutes before the gravel on the second lap.

Our group split up again in the gravel, and I wasn’t sure if this was an attack from the front so I bridged across to David Novak and David Carpenter. We came back together on the other side of the gravel and continued to rotate. A few miles later we had a time split of two minutes having lost a minute to the lead group through the gravel section and the twisty descent leading into it. We started pushing the pace again, but our next time split was 1:45 and I thought “uh-oh”. This was right before the long tailwind section leading into the feedzone. We killed it through there and then across the interstate our lead was back up to 2.5 minutes.

I was expecting an attack in the gravel, but it didn’t materialize there. Instead, it was on the hill at the turn onto Rock Springs Rd where David Novak picked up the pace taking Ryan Shean with him. I saw it immediately and killed it across the top and then Tanner finished the rest of the bridge up to them. I encouraged everyone to drill it since we were down to just four riders and we did. Ryan was struggling a bit but the three of us worked hard to stay in front of the chasing three. Shortly after the second Duck River crossing (one of the most biodiverse rivers in the country!), they caught back up to us. There was some hesitation because what to do you do in that situation. Oh, hi, we weren’t really trying to get away from you, just having a good stroll off the front here 😉

The hesitation didn’t last long, though, as David attacked again. I chased first and then when I went to pull off, nobody came around and there was a tiny gap so I drilled it as hard as I could on a downhill … thank you Martindale 6.0s oh my goodness it felt like a hurricane was pushing me forward down the hill. At the chicane at the bottom I literally thought “if the tires hold on the wet pavement, that’s great … if they don’t hold, oh well this is racing”. I had closed the gap quite a bit and David was right there maybe 2 or 3 seconds in front of me for the next hill, but he started pulling away again. I knew that my best shot was to catch him before the top of the long hill where I saw the deer last year (I thought about that deer every lap). I think David eased up after the left turn because I then closed the gap pretty quickly.

He wanted me to pull, but I was unable to pull. He graciously pulled for the next half mile while I recovered. This took us to the gradual downhill across the busy road before the feedzone. I took over there and killed it hoping that our gap would stick. We entered a good rotation through the feedzone, but then after the left turn with 2.5 miles to the finish we started to cat/mouse. My legs were not exactly feeling it for the sprint so I was hoping he would do more work but we had gotten a time split of 30 seconds to the chasers which was more than enough time to roll slowly to the finish. David knew it, too, and he kept me in the front. We started our sprint from 17mph when David attacked hard. He told me after the race that he was spinning out on the wet roads when he attacked. I don’t doubt it because even though I was trying to anticipate it, he still attacked with enough force to easily open the gap. We were still way out from the finish (maybe 400 meters) so I was hoping he would fade and I drilled it until about 50 meters to go when he was already posting up ahead of me. C’est la vie!

I am so happy to have finished on the podium two years in a row – 3rd last year, 2nd this year, maybe next year will be my year!

2014 Hell of the South annotated heartrate data (click to enlarge)

2014 Hell of the South heartrate summary