This is just a quick post so I could upload the bazillion screenshots and photos from my ride today. I set all kinds of new records … one shortest distance record, but most of the records were shortest time to reach a given amount of climbing. I was pushing the pace really hard – and went for three KOMS. All of them were spontaneous decisions, but they were definitely all-out efforts. The last KOM was the double oak way descent, which I set when I saw a jeep wrangler up at the radio towers with a pull-behind trailer. My first thought was, “oh that’s interesting – somebody must have gotten permission to be up here with a dirt bike or 4 wheeler”. But then I saw the side of the jeep said “Property Patrol” and I realized that the trailer was for confiscating off-road vehicles (and possibly bikes). So I took off like I was being chased by a swarm of bees. I big chainringed the short side of the roller coaster and I hit 52mph on the final steep portion of the descent. Then I did hill repeats to take my total up to 10,000 feet of climbing in just over 3.5 hours. It would have been even quicker if I had been able to do repeats on the roller coaster – but there was no way I was going to risk getting arrested and my bike confiscated.

Oh – and before I forget – here is one more photo from my mega ride on Wednesday – a picture of all the clothes that I went through during the day thanks to thunderstorms and 100% humidity. 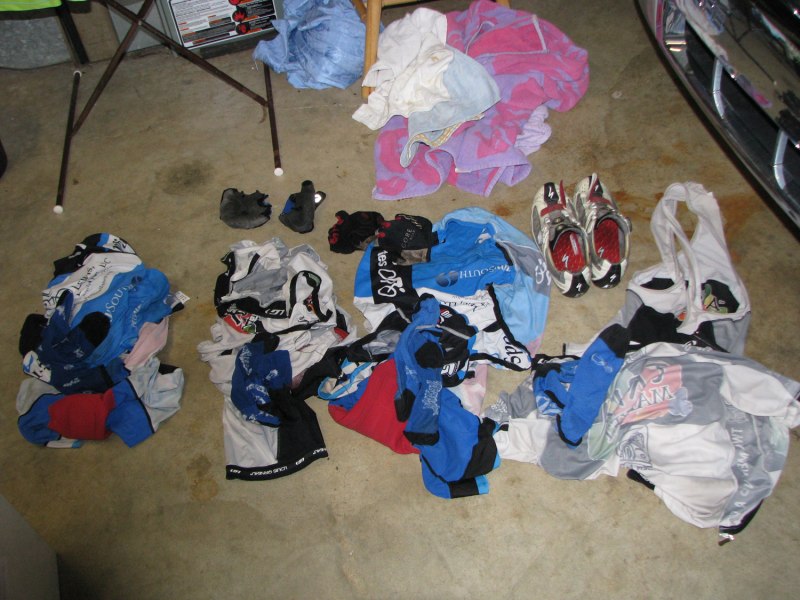 Four kits, four pairs of socks, and two pairs of gloves – to ride 249 miles in one day – thanks to thunderstorms and 100% humidity

I’m going to go back and caption these photos and screenshots later. I think some of the screenshots are probably out of order … will re-arrange them later.

Approaching the top of the Healthsouth Helipad strava segment

View from the Healthsouth Helipad looking towards the Double Oak ridge lines (Brook Highlands, Hugh Daniel, and Double Oak itself)

Looking along the double oak ridge line from Co Rd 41

Looking up at the radio towers peaking out behind the first ridge line on Double Oak. The double oak roller coaster dives off the front ridge line, bottoms out 125+ feet below, and immediately goes back up the second, higher ridge line at a 15-20% gradient for 1/4 mile.

Tornado damage from the April 2011 tornadoes. There should be a lot more trees in this picture.

This is right before the tornado damage.

Four kits, four pairs of socks, and two pairs of gloves – to ride 249 miles in one day – thanks to thunderstorms and 100% humidity