Today was my last ride for 2011, and it just so happened to take me over the 18,000 mile mark for the year. I had originally thought I was going to be short of 18,000 miles, but I noticed after my ride on Monday that I was reasonably close to try and make it there by the end of the year. Also, I had 2,134,824 ft of climbing … that’s the same elevation gain as climbing Mt Everest 73.5 times starting from sea level. 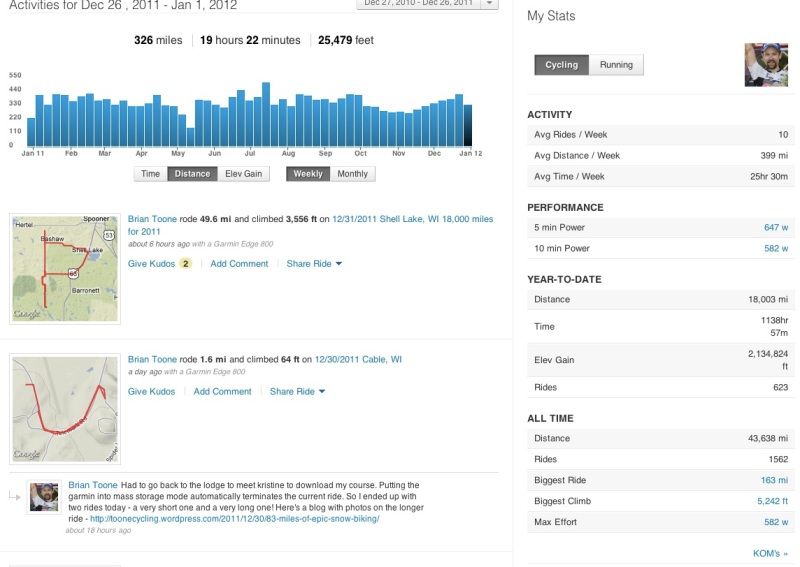 Screenshot of strava stats for 2011

I also ended up winning the Strava climbing competition for December and for 2011.

It’s so cold even the water bottles have to wear gloves!

Terminal Morraine in the direction of Timberland Hills

Rolling hills heading towards the morraine

This is almost a categorized climb

Church in the highlands

Lights, grooming equipment, warming hut – the only thing missing is the snow!

Confused yet? The small green signs on the left say “public hunting and fishing grounds”. The sign on the tree is a “posted no tresspassing” sign

More of Co Rd J with blowing snow in the distance

Snow biking with the road bike – yes, it’s possible, but not recommended. That is an ice covered road, the snow was much easier to ride on

I think this was somewhere near the 18,000 mile mark for the year

Snow drifts on the lake. You can ride your mountain bike on the lake as long as you stay in the snowy areas. It is fun to try to map out your route from one snow drift to the next to minimize the areas of open ice that you have to cross. It is also possib

Trickiest part of the ride was navigating the driveway — all good!

Screenshot of strava stats for 2011

Beautiful winter scene - Imagine 9 miles of riding on a snowy road through pristine winter wilderness. That was the first 9 miles of my ride!

Another amazing day of riding up here. This time I braved the snow-covered roads leaving the Telemark resort having gained confidence riding in the snow yesterday for a mile or so. It was well worth it to be in such a remote location on winding, hilly, beautiful roads and trails that pretty much paralleled the Birkie trail all the way to Hayward. If I had done the Seely fire tower climb, then I might have even crossed part of the trail. But, unfortunately, I had to turn around shortly into my ride because I had forgotten to upload the course to my Garmin. So, I turned around and headed back to meet Kristine just as she and the kids were driving out to head back to Shell Lake. Right there on the side of the Telemark entrance road, I connected my Garmin to the laptop and transferred the file. Then I set off again on what was an 83 mile, 5+ hour, mountain bike adventure.

I spent most of the morning with a good internet connection while the kids went skiing again with Kristine and Poppa Dale. I plotted out a course that would take me from Telemark back to the Cardwell house in Shell Lake over an hour away by car. The course took me onto 9 miles of untreated snow covered roads and trails behind Telemark that were just amazing and fun to ride. Spider Lake Fire Lane started out well packed from cars driving out to cabins along the road. But eventually, once I made it past the last cabin, the snow got really deep and loose since not very many cars had driven over it. Still, it was possible to go slow on the downhills with minimal fishtailing and then crush the uphills. I would imagine that my speed on some of the uphills was faster than the downhills. It’s amazing what the extra traction of a spinning tire will do. Theoretically, I suppose you could hammer the downhills and achieve the same effect but the consequences of a fall at 30+mph make me choose the more saner option of riding the rear brake gently down the hill at a comfortable 10-15mph.

For those of you who have ridden through sand, but never ridden through snow, think of packed snow the same way you would think of packed/wet sand. Loose snow, however, is just like riding through loose sand with the same fishtailing effects. The only difference is that you are expecting the fishtailing in the sand, but not on the snow when it has been hard packed and suddenly transitions to loose or when you lose the car track you were following. Also, turning on the snow is tricky. On one downhill, I was running out of room for the turn and ended up all the way on the side of the road – but it was pretty heavily banked and I ended up sliding through the turn with my wheel still pointed off to the side. This got to me to a straighter section where I could straighten out the wheel.

I only had one bike problem on the ride, when I couldn’t shift back into the big chainring. I spent a few minutes about an hour into my ride trying to figure out what was wrong and eventually just cranked the inside limiting screw until it would shift back up and that worked for the rest of the ride although I had quite a bit of chain rub on the front derailleur so that was a little annoying to have to put up with for four hours.

Here’s the ride map and interactive data from Strava –
http://app.strava.com/rides/2982931

And here is the super hi-res topocreator map –

Finally, enjoy the pics and Garmin screenshots that I took on the ride –

High school ski team – If you look through the trees near the center of the picture, you can see the red jackets of a high school team skiing during their winter camp.

New snow – We had about an inch of new snow fall while we were at the lodge.

All packed up and ready to head out – I helped Kristine load the car and waited for the kids to roll out their suitcases before I headed out on my mountain bike. Josiah wanted to pull his through the snow.

Spider Lake Fire Trail – I turned onto this road within half a mile of leaving Telemark. The snow was good and packed down from cars heading out to cabins. Once I made it past the last cabin, the snow became quite a bit looser and trickier (particularly on the downhills)

Well packed snow – For the cyclocross riders out there, imagine riding through a really hard sand where your wheel sinks down in but not completely. If you hit the snow ridges though, it is the same as riding through loose sand and your wheel immediately starts to fish tail. So the challenge is scanning far enough ahead to follow the path that has been driven on the most.

Warning cabin boobytrapped – I rode past this at a pretty good speed, but I had to turn around and come back and take a picture of this sign.

Deep snow – Spider Lake eventually turned into Telemark Rd which was really rural. The snow was loose and deep because the road climbed up well over 1500′

Beautiful winter scene – Imagine 9 miles of riding on a snowy road through pristine winter wilderness. That was the first 9 miles of my ride!

The end of Telemark Rd – Up ahead in the distance you could see where Telemark Rd turns into Co Rd O, which was plowed and paved. My old iphone 3g camera apparently couldn’t see it.

Self portrait – no ice stache – I’ve done three rides up here now, but the temperature has been too warm for a really good ice stache. The temps are supposed to plummet this weekend so maybe I’ll get one before the end of the trip. Iphone 3G with only one camera lens are really difficult to get a self portrait.

Co Rd C long climb to Meteor Hill – This is the initial climb on Co Rd C towards Meteor Hill. The climb gains over 600′ spread out over 5 miles with lots of ups and downs along the way.

Lots of snow at 1800′ – Elevation makes a really big difference in total snowfall, especially in years like this when it is warmer and the snow sometimes mixes with rain. I imagine at this elevation it stays all snow.

Hills across the top – There actually two 1800′ spots. This picture is taken looking down a hill before the road rises back up again.

Long descent – This is a really long rolling descent back down towards Rice Lake. I am sure that this is categorized climb coming back up the other way as the road gains nearly 600′ in just 3 miles. It might even be this area’s only Cat 3 climb.

No hands on the descent

Hungry and thirsty – Even in warmer temps (low 20s), water bottles are really tricky to keep from freezing. I had been “out” of gatorade (i.e., the rest of what I had left was frozen solid) for about 10 miles by the time I made it to this gas station. I also was very hungry so I enjoyed a rather large $1.50 cinnamon roll.

Co Rd D rollers – This is easily the best road to get from Rice Lake back up to Shell Lake. Very good pavement and tons of rollers and beautiful scenery. Unfortunately, today it was straight into a light headwind.

One of many small beaver lakes alongside Co Rd D

Chased by the light – It was a race to make it to Shell Lake before dark. Here I still had about 15 miles left to go.

Not a bunny rabbit – When I first saw this in the lake, I thought it was a bunny rabbit. By the time I got close enough to take a picture, I realized it wasn’t even an animal – but I went ahead and took the picture to get another picture of Long Lake. It is really long and turns around the hills in the distance.

Still on Co Rd D – Altogether I was on Co Rd D for close to 30 miles. The large white hill in the center left of the picture is the county landfill.

Two to one climbing ratio

Shell Lake airport – the runway goes right up to the lake

Shell Lake, population 1308 – my wife is from a very small town.

Drive-through Christmas lights by the lakeshore

The Cardwell home – After more than 5 hours and 83 miles of riding, I made it to the Cardwell house just after sunset.