Yesterday, the remnants of Tropical Storm Lee blew right through Birmingham transitioning into what our local forecaster, James Spann, called “the perfect storm” as it turned into an extratropical storm when it collided with a low pressure system just north of us. We ended up with almost 8 inches of rain and some pretty amazing winds last night. Some of the gusts were easily in the 40-50mph range given how much the wind was howling. We almost got the kids out of bed twice to take them down to the basement, but in the end decided not to since they were both sick and needed rest. This morning on my commute into Samford, I did a damage survey around the Cahaba Heights / Mountain Brook area all the way down to the Cahaba River. These are the pictures I took on my way into school. Once I got to school, however, I found the campus pretty much deserted. I found a couple people to ask what was going on, and it turns out the campus still didn’t have power (at 10:30AM) so they went ahead and cancelled classes for the rest of the day. Somewhat disappointed because I was looking forward to what I was going to cover today, I turned around to head home and took a few more pictures of the hardest hit area up on top of the mountain in Vestavia Hills where the winds must have been the strongest. Here are all the pictures from my ride into and then back home from work – 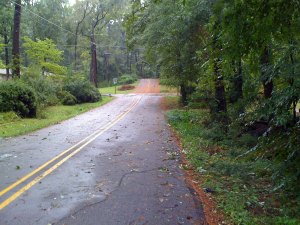 8:12AM Teton Rd – lots of pine straw leaving my neighborhood. The aroma of the day was the scent of fresh pine, and the sound of the day was generators humming.

8:16AM Janebo Ln – tree down across half the road. 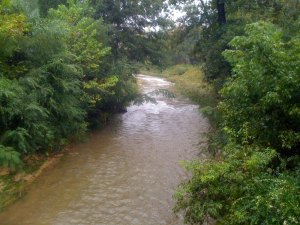 8:19AM Little Shades Creek – high, but not as high or fast as yesterday during the afternoon deluge. 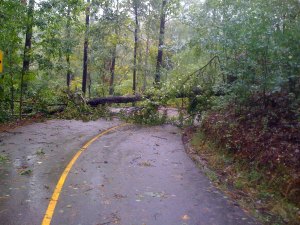 8:37AM Caldwell Mill Rd – Tree across the road in a blind curve on Caldwell Mill Road – glad the wet, slippery pine straw kept me slow heading into the curve.

8:42AM Caldwell Mill Rd – This stretch of Caldwell Mill was hit by the April 27th tornado and now there are two more trees down on the same stretch of road from the remnants of a tropical storm.

8:45AM Caldwell Mill Rd – This is one of my favorite roads to ride in heavy rain – with the 15% gradient, you feel like you are riding up the waterfall alongside the road.

8:54AM US Hwy 280 – A key traffic light was out about a mile or two closer into town from where this picture was taken, and look at the impact on traffic at nearly 9AM! This is a sequence of pictures showing an ambulance trying to make it through the mess. 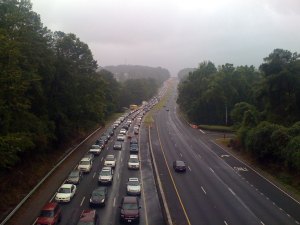 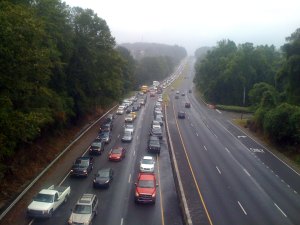 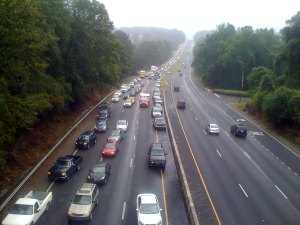 9:03AM Dolly Ridge Rd – In an effort to bypass the 280 mess, the parallel local road (Cahaba River Rd) was bumper to bumper all the way down to the intersection with Acton Rd near the Colonnade. These two pictures show the mess: 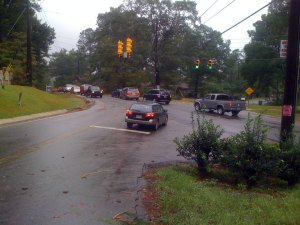 I was heading to the Cahaba River (the lowest point in our part of Birmingham) to see the impact of the flooding, and it was quite dramatic.
Normally there are two channels that bypass the tree that has been growing on a tiny island in the middle of the river just below the dam. Today might mark the end of the tree as it was bending quite heavily from the force of the water. The tire you see floating here is one of the two tires that you will see in some of the following pictures although I missed seeing it go over the edge.

9:13AM Cahaba River Rd – Lots of debris including the really large tree shown getting closer in these three pictures could not escape the backflow of the water going over the dam. In fact, it was incredible the force of the backflow. As I was trying to take pictures, smaller logs would literally jump out of the water and go flying directly into the waterfall! Then they would be forced down below the water and reappear slightly downstream before getting pushed again back towards the waterfall. It was amazing to watch – I probably stood there on the cement overlook for more than 5 minutes watching. 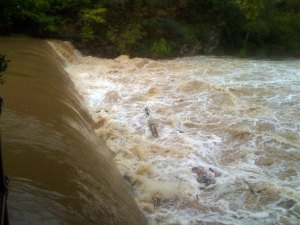 9:19AM Cahaba River Rd – The flow of the water above the dam was deceptively slow considering the force with which it was rushing over the dam.

Check out the video we took with the kids when we were out driving around on Monday. Also, here is a picture of what the spillway looked on Monday during the heavy rains:

MONDAY 5:45PM – Altadena spillway during the heavy rains on Monday 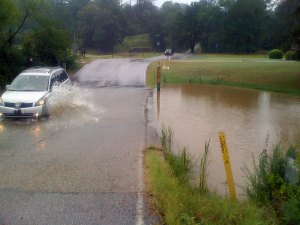 TUESDAY 9:36AM Altadena Valley Golf Course – This spillway was quite a bit lower than yesterday. 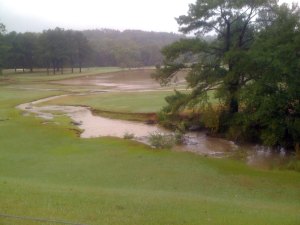 9:37AM Altadena Valley Golf Course – The pond that the spillway empties into was dug out, expanded, and deepened quite a bit from the natural pond that was there years ago to accommodate these flood conditions. It has worked quite well because the rest of the golf course was relatively unflooded compared to previous years.

10:18AM – It appears the higher parts of Vestavia took the brunt of the really strong winds with numerous large oak trees down. This one fell right in the middle of the three-way intersection! The second picture shows the same tree from a different angle. You can see how with all the rain, the saturated soil couldn’t hold down the heavy trees in the strong wind. 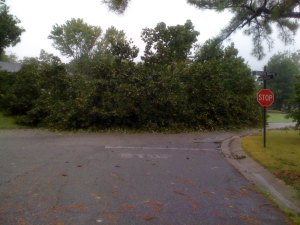 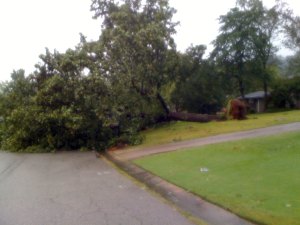 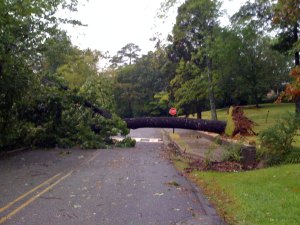 11:07AM Smyer Rd – Here is the intersection of Smyer and Shades Crest – no KOM setting on Strava today!

11:08AM Shades Crest Rd – Here is the same tree showing where it knocked out the power lines and fell across the sidewalk

11:10AM Shades Crest Rd – This was the only tree that I saw that fell on a house. It was crazy windy last night around 8PM. Twice we thought of getting the kids up and taking them to the basement even without any tornado sirens going off.

11:18AM – Lots of large trees like these two fell in yards at the top of the mountain. 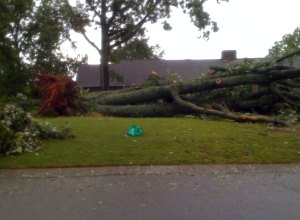 11:18AM – Lots of large trees like these two fell in yards at the top of the mountain.

11:22AM – Here is a smaller tree that fell in a yard on the descent off the mountain. This picture also shows the flying pig that is positioned in various places in this yard. It is directly across the street from a huge house/huge yard that has four mountain goat statues that are positioned throughout the yard doing different things. Once, they were playing badmitton. Another time, they were hiking with backpacks on the sidewalk. Another time they were pulling an old stage coach. I finally had my camera with me to take a picture of the statues, and they were nowhere to be seen! At least the flying pig was still there. 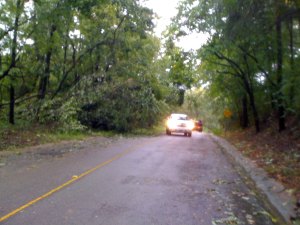 11:25AM – Vesclub – Here is a tree down halfway across Vesclub coming out of the steep 20% curve at the bottom of one of the “steps” of the Vesclub climb.

11:50AM – Tyrol Rd – This tree was the closest large tree to our house that was down about a half mile from our house. This is just on the other side of Rocky Ridge in the South Cove Dr / Panorama neighborhood. Maybe we should have gone to the basement after all!