We left Birmingham on Christmas Day just before noon and arrived in Wisconsin a little bit before 11AM on Sunday – 23 hours total trip, out of which almost 20 was me driving. Instead of sleeping once we got here, I went ahead and decided to push through the training and enjoy the beautiful winter wonderland with a long ride. The temperature started out at maybe 21 degrees and eventually ended up at 18 degrees by the end of the ride. Here’s my before/after video for my ride complete with lots of icicles on the beard! The music is playing from the church “bells” up the street. That’s the church where Kristine and I got married 7.5 years ago.

Check out the route map, too. You can tell it’s pretty flat based on the topography color scale, which only varies from just below 1000ft to not quite 1400ft as opposed to my maps from Birmingham which usually vary from just below 400ft all the way to 1500-1600ft. 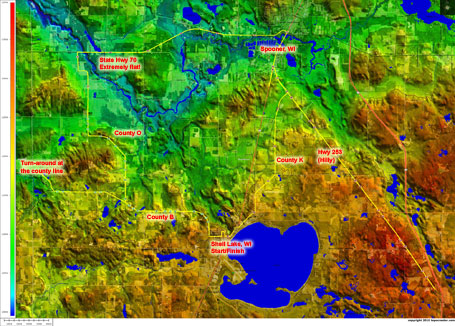 And here is a small gallery of cell phone photos from the ride:

Snow cover at our location (and also back down in Birmingham!)

This ride capped off five weeks of hard training from just before Thanksgiving until just after Christmas. Check out the stats in the graph (from Stava) and table below. Can you tell which week was spent riding in Indiana based on the total elevation gain for each week?

For the four weeks that I was riding in Birmingham, I led the Strava “Climber” competition each week by several thousand feet. This is even competing against all the riders in the Bay Area of San Francisco with endless climbing at their disposal!

1 thought on “Into the winter wonderland for some winter training”