Quick summary: 3rd place! behind two Masters World Time Trial Champions: Mike Olheiser (2006) and David Grice (2003). I was happy with just about every aspect of my ride except for having a little bit too much left towards the end. Mike’s time of 48’27” shattered the old course record set by GW by over 5 minutes. David started 1 minute behind me, and I expected him to catch me before the halfway point. I was having a good ride though, and by the top of the climb to Bull’s Gap I estimated that I was either pulling ahead slightly or still 1 minute in front of him. By the end, though, David had pulled back some time and ended up riding 54’13” which was 38 seconds faster than me, but which also means I have now completed two time trials in which I didn’t get passed by anyone! I believe Mike Lanham (Marx and Bensdorf) was fourth followed by Travis Sherman (Marx and Bensdorf) in fifth. The full results are posted on the COGS website.

Here is the power/heart rate graph. My speed / distance is still off or maybe the course wasn’t quite 22 miles?

Finally, here’s a comparison of pictures right before the start of today’s race in 2008 and the one 15 years ago in 1993. Enjoy! 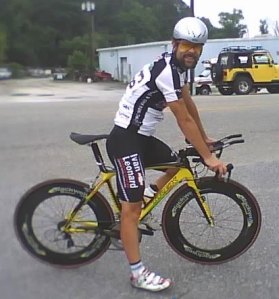 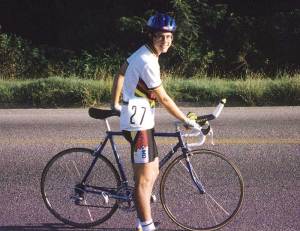