Post-ride 12/24 back at the house to kick off the Festive 500 with a fast century before Christmas Eve service.

Today, I finished up the Rapha Festive 500 challenge to ride 500k (310 miles) between Christmas Eve and New Year’s Eve. This makes three years in a row now that I have been able to complete the challenge, which hasn’t always been easy, given that we usually spend most of that time up in snowy and cold northwest Wisconsin. My ride today was a 78.8 mile ride from Shell Lake, Wisconsin to Heartwood Cabins (where Kristine and I had our wedding reception in 2003) via Hayward where I switched from my mountain bike to a rental fat bike.

One of the things that was really interesting this year is the crazy weather we have been having down in Alabama. Temps have been in the 60s and 70s degF just about every day in December. With these rare hot temps, I have been riding in shorts and short sleeve jersey unzipped nearly every ride. Then during the week before Christmas, it got even hotter despite the weather turning quite wet – Birmingham set record high temps three days in a row in the middle of some nasty rain and thunderstorms. Two of those days included December 24th and 25th – the first two days of the Festive 500. Transitioning from that to snowy Wisconsin was quite a shock to the system as evidenced by the table of rides below:

END_OF_DOCUMENT_TOKEN_TO_BE_REPLACED

Long ice beard in Weyerhauser with Blue Hills I had just ridden through in the background. The beard is frozen breath, whereas the mustache is frozen snot (I had nasal congestion issues all week). 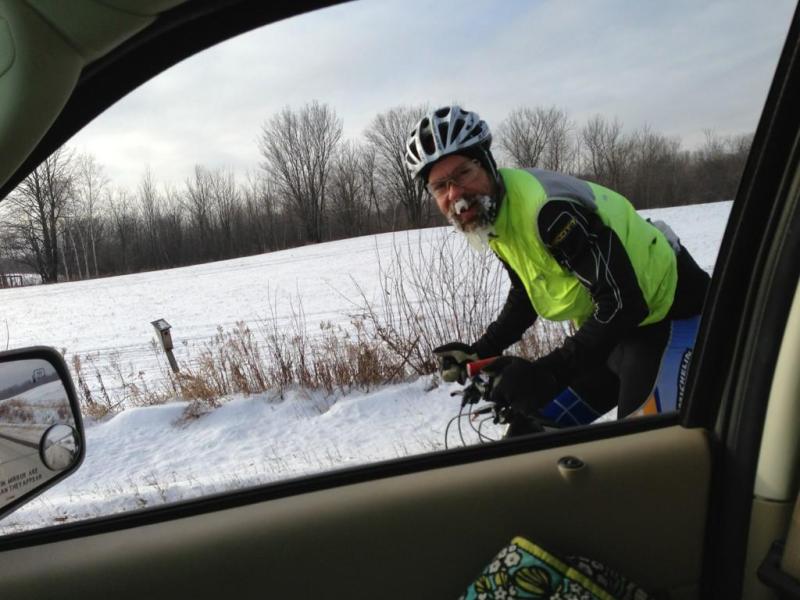 Kristine caught up to me near the very end of the ride and got this pic as we were pulling into Weyerhauser.

We’ve been back in Alabama for a couple weeks now, but I still have photos and videos from one last ride in Wisconsin. Perfect timing for me to finish up this post as we are under a winter storm warning today for a couple inches of snow and ice here in Birmingham. Back up in Wisconsin on January 2nd, my first ride of 2013, I left Kristine’s parents’ house in Shell Lake and rode about 65 mile southeast down to Weyerhauser, Wisconsin through the Blue Hills outside of Rice Lake. This was the coldest ride of the trip with an average temperature of 10 degF. I started pretty early in the day, and it snowed the whole time with most of the ride into a stiff headwind. The snow was just beautiful as it was falling, and especially up on top of Meteor Hill – the high point in the Blue Hills. See this video I took of the snow shortly before descending off of Meteor Hill.

Even though the temp had warmed up a bit by the top of Meteor Hill — maybe 12 degrees or so – this was still the coldest part of the trip because I stopped for a while at the top and took too long of a video (the one above) with my gloves off. Then once I started again, I was on really deep, rutted snow on a long gradual downhill. This meant that I spent a lot of time braking instead of pedaling and generating body heat. Plus, the area was really rural so it would not have been good to have any kind of accident so I was especially slow and careful, which meant my heartrate stayed around 100bpm for 9 miles on the long gradual descent. This meant I was VERY, VERY cold by the bottom. Fortunately, this dumped me out onto a good hilly Co Rd F right through the heart of the Blue Hills where I could warm back up again by going hard. All-in-all I think this was the best ride of the trip.

Here are some of the bikecam videos I got — ordered with my favorite ones first.