Six gap kom jersey today on the double oak cliffs – looks like I will be heading up to Dahlonega this weekend after all!

Josiah and me about to start jet-skiing 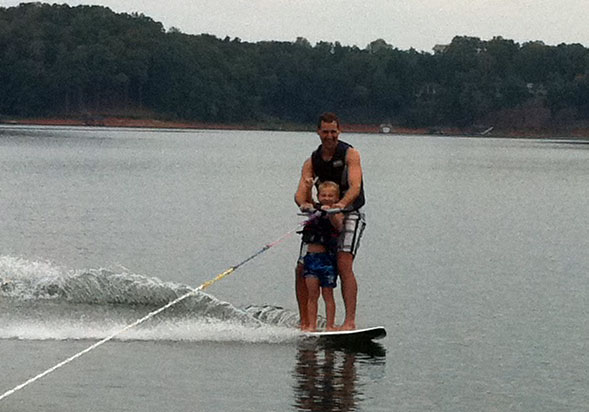 These photos above are my favorite from a great family weekend of hanging out with friends, racing and riding bikes, and enjoying the beautiful mountains of North Georgia. Analise and Josiah wake-boarded for the first time. I got to ride a jet ski for the first time. And we had a great time hanging out with Brad and Brenna and their kids at their family lake house on Lake Lanier less than 30 minutes from Dahlonega. Here’s how the racing went on Saturday and the epic riding went on Sunday…

Saturday @ 7:30PM, Six Gap Criterium
The course was the same three corner course plus the downtown square which is small enough that I heard at least one person describe it as a roundabout. So the course was either three corners and a 180 or 7 corners depending on how you count the square. Either way you go, the course is really fast with two uphill sections and two downhill sections. I was slow in getting to start line so I started on the back row of a small field of about 25 pro/1/2 riders. The layout of the course meant that there was really only one spot to pass people – just past the start/finish all the way through the top of the hill after turn 1. The rest of the course was so fast and had turns coming at you so quickly that it was difficult to pass anyone.

I had to watch the early breaks on the first couple laps go as I was still working my way to the front. Fortunately, none of those stuck, and I was able to get to the front by the fourth or fifth lap. A few laps later I went with a move that didn’t last long. A few laps after that was another move that I was in – this one lasted a couple laps but never got a good gap. Only a couple laps after that, I bridged up to a move started by Brendan Cornett (TBB Sports), who has been riding super strong this year, and one of the UHC-706 riders (Jonas?). Brendan was clearly the strongest and drilled it hard, but we never got our gap out to more than 5-10 seconds. Even so, we held that gap for quite a few laps (about 1/4 of the race) before getting pulled back in.

Then there was a flurry of attacks that eventually saw Scott Kuppersmith break free. A lap or two later, Lucas Wardein (Florida Velo), attacked and bridged to Scott solo. I think at that point everyone looked to UHC to bring back the move, but the gap had ballooned to nearly 30 seconds so it was too late to bring it back in the last five laps. Johnny Brizzard (Subaru) raced aggressively but couldn’t get a gap to stick. He was at the front drilling it hard at the start of the last lap when I decided to attack as soon as the pace let up. Going into turn 1, we slowed down just a bit and it was now or never so I attacked as hard as I could hoping to hold it through all the corners. I was able to just barely hold it to the finish with Brendan and Oneal Samuels (UHC-706) coming up fast behind me for 4th and 5th. Kristine got a good video of the finish starting with me charging through with about 500 meters to go…

I was really happy to finish my last criterium for the year with one more podium! All my power/heartrate data is below:

Sunday @ 7:30AM, Six Gap Gran Fondo
Less than 12 hours later, I was lined up with close to 3,000 other people awaiting the start of the annual Six Gap century. There is a reason why this event draws so many people – the course covers some of the best cycling roads in the entire country. Huge climbs, awesome descents, and lots of fun awaits those who do this event. The century also has a KOM competition that was sponsored this year by the USA Pro Cycling Challenge (the pro tour race in Colorado). This year’s competition was based on your chip timing up Hogpen Gap – a 7 mile stair-stepper climb with sustained sections as steep as 15%.

The first few miles leaving the high school were a great time chat with people and enjoy the draft of such a huge group. When you get that many cyclists together, you know that there are going to be a lot of yo-yoing back and forth as the pace accelerates on the downhill and then suddenly slows on the next steep roller — so you do your best to pay attention and help each other out by calling out when the pace is slowing and everything is fine. The group takes up pretty much the whole road, but on a Sunday morning in a rural section of the mountains of north georgia, I can only recall seeing a couple cars the entire 10 mile section leading into the first large hill on the course.

I was pretty far back when we reached the first of the six major climbs of the day – Neel’s Gap. I worked my way close to the front by the top of the first section of the climb. Then shortly after the bottom of the next climb, I finally made it all the way to the front. My teammate, Boris Simmonds, accelerated a bit and got away from the group early on the climb. Jimmy Schurman (Globalbike) set a fast pace that eventually reeled in Borris and dropped everyone except Christian Parrett (Globalbike), Mark Fisher (strong rider from Birmingham), and me. Across the top, we slowed down enough that quite a few riders joined us on the descent with a group of maybe 20 riders starting the climb up Jack’s Gap together.

The pace up Jack’s was tame enough that most of us were still together going into the third climb of the day (Unicoi Gap). Mark pushed it super hard at the bottom. I was on his wheel so I initially went with him, but I was pushing 375 watts up the climb and wanted to save some energy for the next climb up Hogpen Gap. Mark went on alone and I joined the rest of the group cruising up Unicoi at a more leisurely pace. We stopped at the top and refueled with lots of PB&J sandwiches.

Our group pushed the pace hard heading into the Hogpen climb so we were down to less than 10 riders by the turn onto GA-348. Jimmy Schurman was drilling it hard at the front and pretty soon it was just me, Mark, and Christian again. We crested the first part of the climb together, but Mark came off our group on the next steep section of the climb. Eventually we caught a couple riders who had not stopped at the Unicoi rest stop. Last year, Jimmy had dropped me at the steep section of the climb where there is a pull-out and several portapotties setup. This year I was happy to be able to hang with him and Christian all the way to the last steep roller before the top (about 1K to go). I just couldn’t sustain an above-threshold pace anymore so I eased up a bit to finish the climb at right about my threshold power of 300 watts.

After a couple minutes of waiting for more people from our group to catch up at the top, we headed down the super fast Hogpen descent. I thought Wolfpen was included again in the KOM competition so I pushed the pace hard at the bottom, Jimmy took over in the middle, and then Christian finished it off. Wolfpen is not nearly as steep as Hogpen so there was about 10 of us who survived the climb together. It’s tricky passing all the 3 gap riders and my voice was kinda horse from shouting “hello, on your left” up the climb and down the descent on the other side.

The final climb up Woody’s gap is much shorter than all the rest, and the descent was mostly good this year. Last year, we got held up by more 3-gappers and more cars on the road. This year, we eventually caught a truck pulling a 4-wheeler on a trailer and had to wait for him for a mile or two. Then he decided to stop to let us by (which almost caused us to plow into the back of him) but I was thankful that we could bomb the remaining mile or two of the descent. The rollers were good, and Christian pointed out the start of the dirt climb up Woody’s gap so I’m going to try to hit that up for southern cross in february.

Another year, another fun time at Six Gap! Here is all my power data … the first map below has the six climbs annotated with power, time, distance and vertical elevation gain. 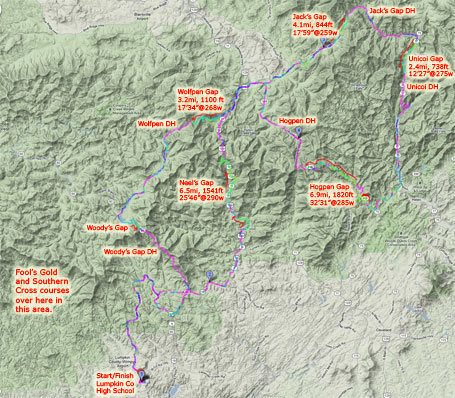 Finally, here is a map of our boating fun yesterday and a couple more videos of the kids wake-boarding with Brad. 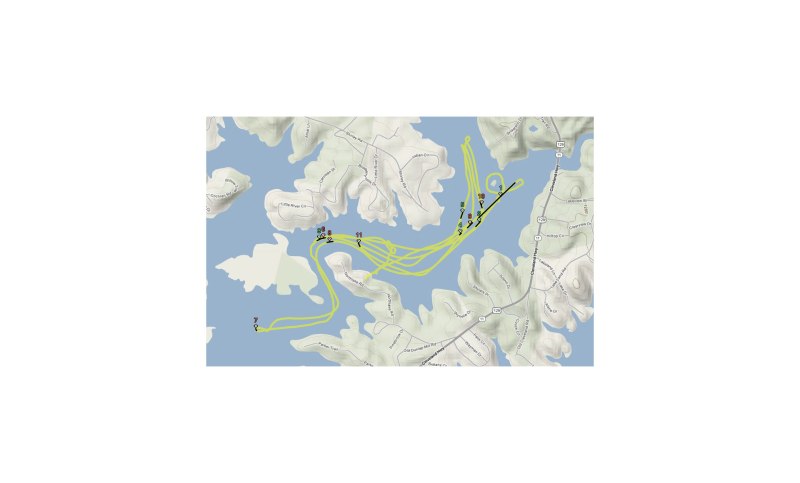 https://toonecycling.com/...
Read the TLDR for my 11th place finish in the Tour Divide. Links to individual days in post.

http://toone2015.briantoone.com
Read about my 7th place finish in the 2015 Race Across America.