One of my favorite songs on the Hamilton soundtrack is “Right Hand Man”, which introduces General George Washington. In that song it talks about the long odds the Americans face in revolution and how Washington needs someone to help him organize and strategize, which ends up being Hamilton. There is an off-beat line towards the middle of the song that says “We ride at midnight”. Well, that struck a chord with me because on this most recent cycling adventure, I started several rides close to midnight. And on top of that, the undertaking of riding close to 1500 miles in a week ending with a very tough unsupported race to get back home seemed like long odds indeed [it ended up being a bit less than that … but I didn’t know as I was leaving my house at midnight that there would be a few of our CRAAM rides cut short due to severe weather].

What does Hamilton have to do with anything? The soundtrack got me through several sections of the TNGA course and even that first night riding up to meet CRAAM in Hamilton, Alabama where I was unexpectedly sleepy towards sunrise having only slept an hour before leaving at midnight. It is 2 hours 23 minutes long. I started measuring parts of the course in terms of Hamiltons. The opening section is just a single Hamilton (started somewhere on the long opening Overflow Creek climb). Tray Mountain was surprisingly only one Hamilton as well. From Helen all the way over to Coopers Creek it was getting very hot so I was shade navigating and needed quiet to hear cars approaching from ahead or behind with a lot of advance notice. After Coopers Creek, the next obstacle is Stanley Gap which ended up being less than a single Hamilton. That was nuts to me given that I normally hit that section very tired, very sleepy in the middle of the night. It was still daytime approaching sunset and it was a million times faster (specifically 34 minutes faster on the climb and 22 minutes faster on the descent … plus it was actually fun instead of torture). This was a big psychological boost for me and I made it all the way to the Cohutta climb with enough light to ride without lights to the vending machine right before the gravel part of the climb. Cohutta itself was a little bit more than one Hamilton as I ended up doing a good part of the descent in silence. No more Hamilton after that until the Snake, which ended up being two complete Hamiltons (I was expecting three). And then the last Hamilton ended up being quite a bit later after sneaking by the German Shepherd on Simms Mountain Trail. Prior to that I Book of Mormon’d the Taylor’s Ridge climb accidentally blaring it riding right through somebody’s campsite where the trail dumps out onto the dirt road before the descent on top of the ridge … it was midnight.

Enough about Hamilton, how did I get there? When my good friend Stephen Peters from Tour De Bicycling told me that he and Seana Hogan were planning a Cruise Across America (CRAAM) this summer since Race Across America was canceled, I knew that I couldn’t do the whole thing with them but wanted to join for the Alabama and Georgia sections. I wasn’t sure how much I could ride with them, though, with the logistics of racing Trans North Georgia (TNGA) and a camp for my son in Colorado.

But then my son broke two of his fingers in a bike race, which meant the Colorado camp and my corresponding training on the Tour Divide trail wasn’t going to happen. I switched over to a backup plan to ride a lot of the gravel forest roads in the Southeast. This meant that I would have a little more free time since I wouldn’t have to travel out to Colorado and back. So when the time came for CRAAM to make it through Alabama, I jumped at the chance to ride up and meet and ride with them all the way to the end in Savannah. Plus, since I could do TNGA as an ITT (individual time trial) this year, I decided I could ride straight up to the start of TNGA from Savannah, and then do TNGA to make my way back home.

This meant that most of my riding in July came in two big trips as summarized below:

You can read all about the first trip here: Mini Tour of the Southeast. But first, since logistics were such an integral part to this adventure, I have summarized day-by-day the timing of everything as well as included maps showing this most recent trip (note that this is just the 1309 miles of this adventure and doesn’t include the 1058 mile long minitour which overlapped a lot of the same areas).

The first map below is all the routes on a regular Google Map. Here is the color coding for the routes: 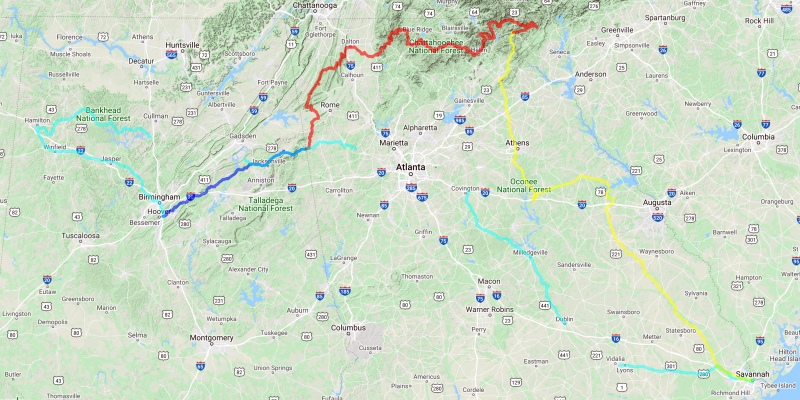 Color coded map of this 1309 mile trip. The gaps during CRAAM are not included in the mileage as that would have taken it up over 1500 miles.

The second map is the same as the first, but showing counties instead. This is my fifth try at the map as it was missing a couple counties on the first few tries.

County topo maps of all the routes. Same color scheme for the routes as previous map.