2016 Season Statistics
Being able to participate in such a significant life-changing endeavor as the 2016 Ride4Gabe was certainly the highlight of my cycling year, and that led spontaneously to the establishment of a primary goal for 2016 – to ride in every county in Alabama in one year. I set this goal when I joined Michael Staley, Wes Bates, and Payne Griffin for the Alabama stretch of Ride4Gabe – a 2000+ mile ride from the Canadian border in Maine to the USS Alabama at Battleship Park in Mobile, Alabama. I realized during the ride that if I biked back to Birmingham after the finish in Mobile and veered west along the Mississippi border, I would hit counties that I can’t normally reach from Birmingham on my training rides. Similarly, I was only able to reach the counties in southeastern Alabama via a two day 500+ mile loop during Fall Break with my 2017 Race Across America crew chief Jeffrey White providing support.

2016 county heat map covering ALL of Alabama in one year! Numbers in parentheses are the number of different rides that entered the county. 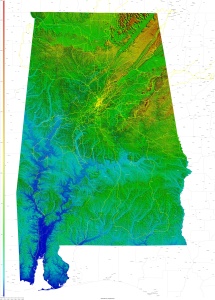 Topocreator map of all my rides in 2016 that started and/or ended in Alabama. Click the image to zoom in or to see even more detail, download super hi-res (41MB) version.

Comparison to past years
All these stats are based on the calendar year January 1st – December 31st.

2016 Racing Summary
With only nine races this year, this has been the least amount of racing I’ve done in some time. Still, it was a great year of racing highlighted by winning the Skyway Epic 100 mile mountain bike race in April. I’ve finished 2nd every time I raced this race, but finally pulled out the win this year. I tried to follow this up the next day with a road racing adventure by riding to the start of the Tour de Tuscaloosa Road Race, racing the Pro/1/2 road race, and then planning to ride home afterwards. I was so wiped out by the end of the race, though, that I caught a ride back to Birmingham with my friend Chris Winslett.