Six gap kom jersey today on the double oak cliffs – looks like I will be heading up to Dahlonega this weekend after all! 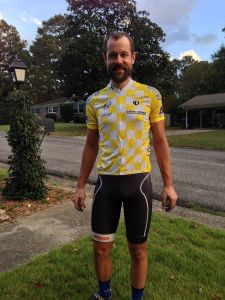 The thing you have to understand about these kinds of adventures is how ridiculously fun they are. Part of the reason I blog about them and take so many pictures is to try to share that intangible sense of adventure with other people and encourage them to get out there and try something new. Shortly after sunrise in Randolph County having already ridden 120 miles from my house, I had one of those moments where I was just grinning from ear to ear when I saw my turn onto a dirt road into the middle of the woods as the epic scale went off the charts with still more than half the ride left to go.

My fascination with the walking dead started this year during the kids’ spring break. Kristine had taken them up to Indiana to visit family because their spring break was not the same week as mine at Samford. I stayed home and saw a link to watch The Walking Dead on Netflix. I was hooked after the first episode and ended up watching the entire series while they were gone that week. On Tuesday after just starting Season 3, I decided to do a long training ride east of Cheaha to the Georgia border since I knew that the Walking Dead was supposed to be in Georgia.

During the ride I noticed how the landscape, terrain, and woods resembled that of the TV series. When I got home, I discovered that I was within about 50 miles of where the series was being filmed. I resolved to go back some time and explore the area more. My wife was dropping a friend visiting us off at the Atlanta airport Saturday afternoon, so I figured it would be the perfect opportunity to ride farther into Georgia without having to ride all the way back home to Birmingham. The tricky part was leaving early enough to make it to Atlanta to meet her at a reasonable time without leaving too early and getting caught in traffic of people coming home from a late night out (dangerous).