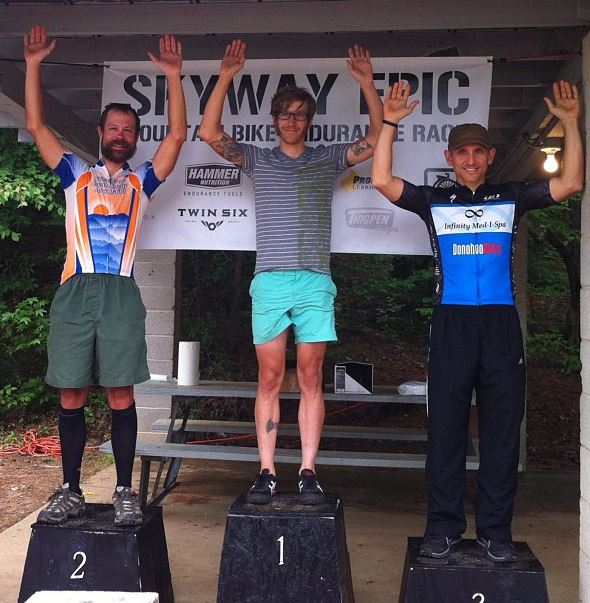 Epic. This year’s race was highlighted by the most epic course of the season and an epic battle for the win between me and Kyle Taylor. I ended up on the losing end of that battle, but I’m still really happy with the race. I gave it everything I had attacking Kyle eight times on the forest road and double-track knowing that he was going to ride the singletrack much faster than me. You can see the entire race (including the epic climbing) in the annotated heartrate plot below.

How awesome is the course? Let’s start with the starting area — a giant boat launch area with room for maybe 25 or more riders on the front row! After a short mad dash up the hill, you enter the sylaward trail system which is very fast singletrack with hardly any roots (woo-hoo!) I entered the singletrack fifth. Kyle got the hole shot and was gone. Behind him two other riders quickly separated themselves from the next group — which consisted of Jayfer Bezier, me, Jamie, and Will Fyfe in that order. Jayfer was riding the singletrack at just the right speed – so I was content to follow him … until Mike Lackey tacked onto our group. I knew he was fast in the single track, so I was nervous that people were going to start trying to pass so at the next opportunity I went ahead and passed Jayfer so I could attack the uphills faster even if I wasn’t taking the corners or downhills quite as fast as him.

I led through the singletrack for the next few miles and we eventually caught one of the riders who had been ahead. When we finally made it through all the singletrack, we started to paceline it and got distracted missing the turn onto the new double-track that Brent had cut this week. Kyle had also missed the turn. We had ridden the singletrack much faster than expected so we made it to the tricky turn before the volunteers.

This cost Kyle more than the rest of us because the lead he had built in the singletrack was gone. Brent got us straightened out though and our group of about eight riders entered the double-track together with me in second position behind Jamie. I was nervous about the new doubletrack, but in the end was able to ride everything including the epic eight foot high entrance ramp which descended down into a huge mud puddle (hidden from view on the other side). In fact this double track was one of my favorite parts of the course because it was completely rideable and yet super challenging with some muddy steep gradients.

After crossing the creek, we climbed a steep hill and this is where Jamie, Kyle, and I separated ourselves from the rest of the group. The top of this hill dumped us out onto the forest road where the three of us pace-lined it and were gone. I was a bit uncertain at this point about strategy because I had been planning for a long chase thinking that at least one or two people would have a huge lead coming out of the singletrack and doubletrack. Jamie came off our group towards the bottom of the Cat 2 climb up to the Skyway. Kyle and I settled into a hard steady tempo, and I debated about attacking once or twice but I remembered how absolutely spent I was last year after attacking at the bottom of the climb to get the KOM. Kyle, too, was wanting to pace for the long race so we decided to split the KOM money but sprint for it anyway — the best of both worlds, neither of us has to blow up going for the KOM from the bottom of the climb — and yet we still had the competitive aspect of sprinting for it to see who could be the KOM. It was really foggy by this point as we had basically climbed from the valley right up into the cloud layer. It turns out that we started sprinting at about 500 meters (1/2 K) from the line which is a long way on a rocky climb, and then we both thought when the 200 meter marker appeared out of the mist that we were at the finish. Quickly realizing our mistake, Kyle attacked again and I couldn’t quite catch him before he reached Anna with the $100 bill at the top.

Making it to the top of the Cat 2 climb, you might think the next part would be easy – but I’d say the most epic part of the course is the skyway itself … epic ruts, epic puddles, and epic views (not today, though) with epic rollers some of which make it all the way into the Cat 4 climb category on Strava. Bike racing is such an interesting combination of camraderie, strategy, passion, endurance, skill, and strength – and that really played out in this race. Kyle and I worked together throughout the skyway with Kyle pushing the pace on the descents (faster than I would normally take them) and me pushing the pace on the rollers.

Both of us wanted to win the race, though, so Kyle tried to dislodge me on the long descent, and then I ended up attacking him eight times on the forest service road and double-track – but I couldn’t shake him. He probably would have distanced himself from me earlier in the double-track except for an epic crash. He had pulled ahead of me and was heading fast down the double track when he came to one of the large puddles — catching his wheel on a rut he wiped out landing in the puddle sending water/mud high into the air. I had a front row seat to watch it – epic. I made it through the puddle opting to ride through on the left since he had wiped out in the middle.

Across the first dam, I attacked again and tried to shake him on the next steep hill, but it just wasn’t happening. I let him by right at the entrance to the singletrack knowing that the game was over, and all I could do was ride fast hoping to hold on for second. I’m glad I did because Jamie was approaching fast and ended up finishing less than a minute after me.

Epic race. Epic course
The photo below is taken from just south of Birmingham on one of my training rides last Sunday. Click to enlarge – you can see the annotated ridges with Skyway rising high above the surrounding valley. There is over 6000 feet of climbing in the race with over 1200 of that coming on the main climb from the valley to the top of the Skyway – one of about a dozen Cat 2 climbs in the entire state of Alabama. The Skyway ridge line is a single ridge line rising high and then dropping down into valleys on either side of it. And it is very long – snaking its way from just southeast of Sylacauga all the way up to Mt Cheaha – the highest point in Alabama. You can see how prominence of the ridge line in both the photo and the topocreator map below it.

The course traverses about 12.5 miles (25 miles roundtrip) of this long ridge line. The jeep road is rocky and rutted in spots (particuarly the descents and climbs) so you have to pick your line carefully – even at high speeds on the descent. It was great following Kyle on the descents because I could follow his line and watch how he handled tricky sections. Even with the rocks and the ruts, the skyway is fast and relentless – constantly rolling so that it is hard to settle into a good rhythm. At the bottom of each roller is a large mud puddle (width of the road) so that you have to snake around on the outside. There is just enough room to make it around if you brush into the bushes right next to the puddle … unless you end up trying to go on the wrong side. On one of the puddles on the way back, it looked like the line was on the left so I headed left and then realized that the puddle extended all the way out to the edge of the road so I had to ride through it — and it was DEEP! I had enough momentum to clear it, though, and catch back up to Kyle who had seen my mistake and taken the correct side.

With good tires and good brakes you can hit nearly 40 mph on the long descent back down from the skyway. The rollers across the valley are also steep so you can pick up some good speed to carry you into the next hill as long as you pick the right line heading around the corners. We only had one oncoming car the entire race and it was easily passed.

Finally, there is the Sylaward singletrack itself. I think Brent has described it as some of the most “grin-inducing” singletrack in the south … and even as someone who is not a big fan of singletrack, I would totally agree. I could go much faster on the singletrack then I normally would risk because the turns are banked and the penalty for failure is not severe (i.e., no huge drop-offs along the side). Part of the reason is that there is a good bit of climbing on the singletrack … there is some contour following (which usually means there is a drop-off to your left or right depending on the direction of the trail), but a contour bend around a ridge is usually followed by a drop-off from the ridge or climb back up the other side of the ridge – meaning that there is a place for me to make up time that I lose when delicately handling the bend around the ridge.

Really finally, the topography of the area is epic. I already described it, but here is some maps I made including a zoomed in view of the singletrack and doubletrack, a map of the entire course, and a zoomed out map showing the course and the ridge line extending all the way up to Cheaha. There is lots of good potential to make this a 100 mile race over to Adam’s Gap and back. I’m planning on doing a 120+ mile ride of an out/back to cheaha some time later in the summer. Will report on some course options then! Already looking forward to next year!!! 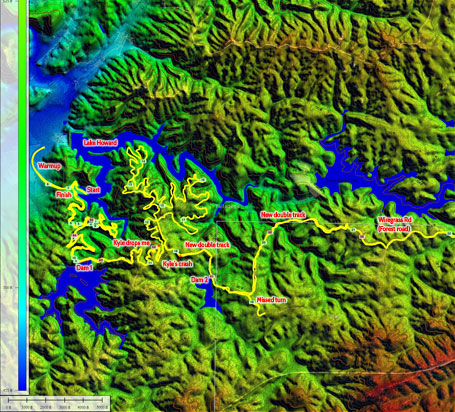 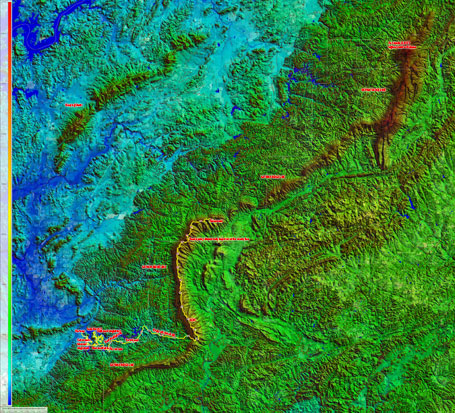