Tough race tonight. Team Type 1 again played it perfectly taking 1st and 2nd with Dan Holt and Alexey Schmidt. Here is how it played out. There was an early break that got a good gap, but I think it was missing TT1 so I was pretty sure it would all come back together, which it did.

Then it gets a little fuzzy but Dan made it into the next move along with Stephen Hirsch (UHC/707) and one other guy (maybe Tim Henry from Litespeed/BMW). This move quickly got a good gap until Mike Stone (Hincapie Devo) went to the front and started to bring it back pretty much single handed. After three or four hard laps he sat up and no one else took up the chase. The gap to the break quickly ballooned to close to a minute – in fact I figured we were going to get lapped.

But then the attacking started. Primary instigators were Mike and myself, but there was also a guy with a black kit and national champ markings on his sleeves (from a different country) who attacked several times. We could never get enough separation in a chase group to escape the field.

Then at the perfect moment when an attack was coming back, Alexey rolled off the front of our group with one other rider. It was a thing of beauty to watch as nobody could respond quick enough. There was a chase again led by Mike but the gap was too big. The break must have been getting tired b/c the two quickly crossed the gap to the leaders making a lead group of six.

The gap from our field to the leaders had come way down to only 15 seconds, but then it was only three laps to go. I found myself on Oneal Samuels wheel, a great sprinter from UHC/707, with two to go and followed him to the very front of the field by one to go. Another rider came around and led out the sprint, but Oneal hopped onto his wheel with me still attached to his wheel. And that is how we finished in the field sprint coming around the other rider by the line. It was only good for tenth in the race, though, as two other riders must have been b/t us and the break of six.

My power meter is still broken, so now power data from the race – but I can tell you it was hard!

What a disappointing race. I missed the original break b/c I thought it was missing TT1, but in fact there were TWO tt1 riders, Dan Holt in the initial move and Alexey Schmidt in a bridge group with Mike Stone (Hincapie Devo). It was a large field combined with the Cat 3s and the fading light it was hard to recognize kits – especially since I started near the back and didn’t move up to the front quickly enough.

About halfway through the race and completely frustrated about missing the move once I realized TT1 must have had a rider up the road by the way they were covering moves in the field, I attacked hard to bridge across. Ended up rolling solo for half a lap rather than establishing a chase group. Once I was caught, I recovered and tried to stay near the front. With four laps to go (2.5 miles per lap), Joey Rosskopf (TT1) attacked hard at the bottom of the pit row hill. I bridged across to him by the top of the hill. David Guttenplan (United Health Care/707) bridged next with Joe Eldridge (TT1). Also, there was a cat 3 with them. The field sat up, and we had a huge gap.

Still, there wasn’t good cohesion until we caught Eric Murphy (UHC/707) and another rider. We got into a rotation for a minute or two, but there were people sitting on. Eric and David pulled hard and a gap opened up to the rider behind them. I looked to TT1 to close it down but they didn’t so I pulled hard and ended up rolling off the group. I couldn’t catch UHC by myself so I sat up thinking we could still work together but it was too late. Field caught us at the start of the last lap. I was 10th or so in the field sprint for 17th or 18th in the race. Meanwhile, Eric and David completed the bridge to the leaders where David ended up winning the group sprint for 3rd — with Alex Schmidt and Mike Stone already off the front of that group to take 1st and 2nd.

Even though it was disappointing the way the race turned out, on the bright side, there was a beautiful sunset sky immediately after the race was over. 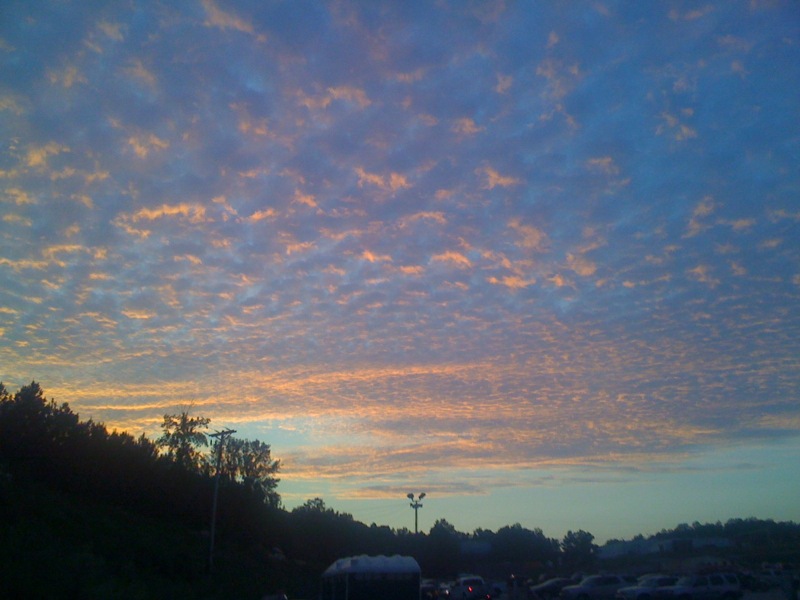