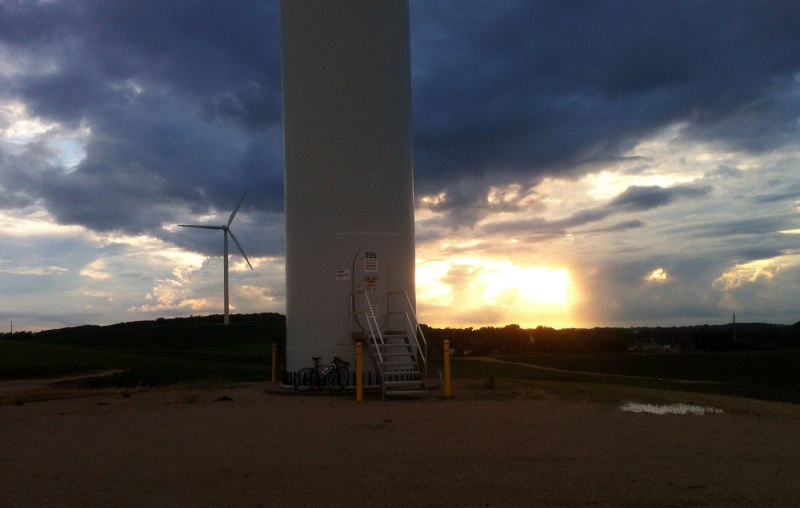 Windmills and the setting sun

Two years ago, I raced all of the Tour of America’s Dairyland including the Fond du Lac criterium. I raced well and crossed the line in first at the start of the last lap trying to maintain good position. Unfortunately, I managed to get passed by 20 people during the last lap to finish just out of the money. I was quite distraught after the race having blown such good position to end up outside of the top 20. I was hoping to redeem that performance with a top 20 finish this year, but with huge thunderstorms and rain showers all across the sky and approaching Fond du Lac before the start I was not very optimistic. We managed to start the first few laps dry, but then it started to rain, and I drifted to the back, off the back, and then expecting to be pulled was told that I could continue to race. I am never going to willingly pull out of a race again after a disasterous race in West Virginia in 1996, so I raced for another 20 minutes or so getting lapped 3 or 4 more times by the field. I used the opportunity to continue racing to work on my rainy cornering skills, as I have had several recent rainy slideouts losing a lot of confidence in the rain.

It was barely halfway through the race by the time that the officials decided I had raced enough and pulled me from the race. I just checked the results, and I was rewarded for my efforts by being placed in the results instead of a DNF — 59th out of 105 starters. Afterwards, wanting to get some kind of training in, I started wandering towards the hills, first looking for some good climbs, and then seeing windmills in the distance riding to try to get a good picture. The windmills are huge so that they appear closer than they really are. And then even when you start to get close to one, you find that the road is gated off or unrideable in the mud or the windmill you were heading towards was actually on a different ridge beside a different road. Eventually, as it was getting dark and as I was getting farther and farther away from Fond du Lac, I started to feel like Don Quixote chasing windmills, and I began to suspect that somehow for many people including me such is the lot of the bike racer. Finally, I found a cool valley with a bunch of windmills with a farm gravel road that was not only rideable but also quite pictureesque. It was amazing to be standing underneath something so gigantic and hearing the whoosh of the three blades as the passed overhead. Standing directly underneath it as the blades headed towards you was a bit disconcerting as you wondered unreasonably that you might have misjudged the length of the the blade and it would suddenly hit you standing there on the ground.

So, anyway, even as I was chasing the windmills I thought of Don Quixote. I don’t know the story all that well, but I believe the basic idea is that poor Don thought that the windmills he was chasing and trying to defeat were actual enemies that needed to be defeated. He continued to pursue these windmills never realizing that they were unbeatable. Comparing this to bicycle racing, the idea is that we as bike racers try so hard to win or at least do as well as possible romanticizing that one good result to the point that it lures us back for more even after a series of really bad results. Often the level of competition is so far above and beyond our own capability that it is truly like Don Quixote chasing windmills – an impossible and illogical vain pursuit.

Again, I don’t know the story all that well, but Don Quixote must have been fulfilled, fully alive, full of purpose as he chased after those windmills even if it made no sense to anyone else. The danger though is the damage that Don was doing to those around him as he sought after those windmills even as he tried to do good and help/rescue/save the world. I am fortunate that my family is supportive of my windmill chasing, and I do everything I can to turn bike races into family trips and family experiences, and I think the good far outweighs the bad, but the very real danger is pursuing too far without putting everything into context.

As I was trying to find a windmill I could ride right up to and set my bike against on my 10 year anniversary with my wife 100 miles away camping with her family in Door County, I realized both the beauty and the danger of bike racing. I had spent the night before camping with them and the morning of our anniversay was awesome with a nice trail run/ride with Kristine and the kids finding a cool boat landing and then a climb up to a tower overlooking Sturgeon Bay and the entrance to Green Bay followed by a little bit of caving with Josiah and then more trail riding and finally capped off joining Kristine’s dad as he finished 1100 miles of hiking the entire Ice Age trail which ends at the tower we had found earlier in the day. All of this before leaving my family to go get dropped in a bike race, but then finding beautiful rolling hills, picturesque farms with barns, cows, and fields of corn, big sky with clouds from various storms on all sides aglow with lightning and the setting sun — surreal, almost perfect, forgetting that an hour or so earlier I had just gotten dropped and pulled from a bike race – I was content realizing that bike racing in the context of life is so small, but in the moment if you look in the right places you can still find something worth pursuing even if it looks like windmills to everyone else.

Storm approaching Fond du Lac. Remarkably, we were able to start the first few laps of our race dry before it started to rain.

After getting dropped and pulled in the race, I decided to head over to the hills to put some miles in and enjoy riding. I noticed this rainbow appearing while riding briefly on the Prairie Trail before turning to the hills

Rolling hills on the way to the windmills

Windmills dotting the hills above the valleys

This was the first windmill I tried to reach, but the dirt road to it was too muddy

“Knee-high by the fourth of july” – these corn stalks are right on track. So funny how far north you have to go for that to be true. In the south, corn would already be above your head at this time of year.

The picturesque Wisconsin countryside — including the windmills

Windmills and the setting sun

Banging my head against the base of the windmill

My tracks up to and back from the base of the windmill. I was fascinated by the rows of corn growing up through the gravel. That is quite the example of perseverance.

With the rain, I decided to go instrumentless — something quite freeing about this — not to have to look down and see how far I’ve gone or what time it is.

The finish line from Wednesday’s road race. I didn’t do well in this race, but if I had would the nondescript line mean more to me than it did accidentally stumbling upon it on my way back to Fond du Lac?

Looking back down a steep hill towars Lake Winnebago

Celebrating 10 years of awesomeness with Kristine – it’s getting pretty serious! 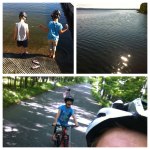 Morning run/ride with Kristine and the kids

Josiah and I went caving and left our mark along with all the other “ancient” writings that Josiah found. Don’t worry, I didn’t press hard enough to scratch the rock — just enough to break through the moss — will be gone in less than a year. 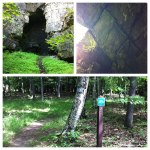 Caving and trail riding with Josiah

Kristine, Boots, Analise, and Josiah heading to the Ice Age trail to join Papa Dale on the last 3 miles of his 1100 mile journey hiking the entire trail.

Tower at the top of a 150 ft climb from the boat landing – my kids are awesome bike riders!!

Made it home, debris from last week’s flood starting to get inundated with floodwaters from today. (Note - these pics are all from today)
Had to make a few detours on the way into work this morning...
Mississippi and Louisiana today. Rouge roubaix course was on the agenda but I decided it was too risky given tire problems and flooding. Still I hopped onto the last part of the course to reminisce many years of strategizing that finishing hill sprint.