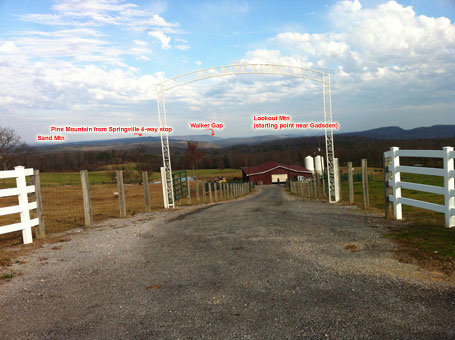 View from near Pine Mountain high point (click to enlarge)

So here is the backstory for this ride – I took Monday off, and on Tuesday my legs felt like a million bucks. So I decided during my ride on Tuesday that I would put in my Strava Shoot-out effort on my Wednesday ride. Tuesday night I was working on topocreator making a custom map of Vermont that somebody is going to use to build a set of custom skis, and I started to think about exploring some new roads up near Pine Mountain. Eventually, I mapped out a 100 mile route that morphed into the adventure below!

It started out with an easy somewhat direct route over to Red Mountain so that I could put in a max effort while my legs were still fresh. The video above has a brief analysis of how the climb went. I started out strong on the gradual opening Highlands section, and when it kicked up steep I felt strong enough to decide to stay in the big chain ring through the steep sections of the climb. This was a good decision, although I felt like I bogged down a bit shortly after the turn onto Cliff Road which averages 10% (max 13-14%) for a tenth of a mile. I got some extra motivation at the right turn onto the cement switchback road as I had to cut in front of a car that started to pull out from the left at the stop sign (I had the right-of-way with no stop sign from my direction). I dropped the car on the u-turn switchback and decided to take a really tight line on the inside of the potholes. The left onto Altamont was no problem, but the car I had dropped then passed me back when I was going 25mph on the flat section of the climb shortly before the house construction with all the cars parked on the left side of the road. There was a near-miss wreck as a utility van pulled out from the construction zone right after the car was passing me. The van then proceeded to drive really slow so I had to pass him on the right side shortly before making the turn onto Redmont. The extra shot of adrenaline there plus perhaps not digging quite deep enough earlier on the climb meant that I absolutely flew up the last part – raised my average power for the climb by 6 watts on the last 25 seconds of the climb. Data for the climb is below:

After the shoot-out, I headed over towards Ruffner Mountain via the reverse of the route I did on Thanksgiving. I wanted to get a picture of the launch ramp coming off the Gate City hill. I also got a video of the Ruffner Mountain climb to the fire tower. If you watch these videos on Youtube, then you can click on video bookmarks in the description to jump to a specific interesting point of the video. 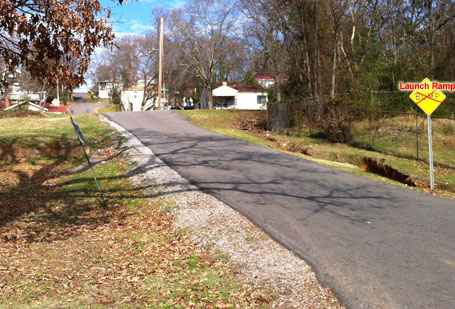 After Ruffner Mountain, I climbed up the super steep Valley Hill Dr (27% max) on the way over to St Vincents East and Turncliff. Then I took Brewster road which is a nice hilly road up to Chalkville. From there, I took Tyler Loop up to Sweeney Hollow road. The tornado damage on Tyler was amazing to see 11 months after it happened. From there, I took Dewey Heights to Faucett to Faucett Circle, which were all new roads to me. Nice pavement, steep hills, and only two bad dogs.

From that point until the start of the Pine Mountain backside climb were all new roads to me. I was fearing a lot of dogs since I hadn’t ridden through there before, but I only saw a few before the start of the Pine Mountain backside climb. That climb was littered with dogs – especially across the top to the elbow road up to the 1440′ high pt. See video below (watch on youtube and click on the video bookmarks in the description to jump directly to the dogs)

Coming back through Clay, I got stuck behind after-school bus and car traffic. Then after climbing up Pineview Rd to the really cool isolated hill neighborhood in the middle of Trussville, I started down the descent and the road was being resurfaced. Nasty fresh tar balls, plus grated pavement, plus lots of crap on the roads I was lucky not to get a flat. It was getting late by this point, but I had brought my lights knowing that I would probably be getting home after dark. I booked it home sacrificing climbing for speed by taking Old Leeds. Traffic was a nightmare on 280 but I avoided it by some creative underpass riding. The sunset views across the top of Smyer Circle and Vestavia Dr were amazing. See below and see the gallery. I was disappointed not to hit 50 on the Vesclub lower descent (must have been a bit of an updraft) so I added on the climb up Little Valley Mountain so I could go down S Cove making sure that a 6.5 hour, 102 mile ride had at least one 50mph section. Guided home by the Christmas lights, I arrived well after dark to end a long, fun day on the bike.

Sunset from top of Smyer Circle looking towards Vestavia Dr with Samford University in the valley below.

Gate City hill launch pad. I came down this on my Thanksgiving ride – you could definitely catch air coming over it at speed.

View from the descent of Cowden Mtn road down into the valley containing AL-75 at the start of the Pine Mountain backside climb.

Sunset view coming around the top of Smyer Circle

Sunset view from the top of Vestavia Dr.

Christmas lights in my neighborhood.

Finally arriving home after starting the ride at 10:30 in the morning.