After riding out to see firsthand yesterday’s tornado damage, I decided to go climb my favorite spots on Red Mountain that have an elevation greater than 1200ft because I spent a lot of time yesterday looking at the topo maps of the far northern end of Red Mountain near Chalkville and Clay. I call all of these spots the “Red Mountain 1200s”, and I wrote about them just over a year ago when I climbed them in December 2010. 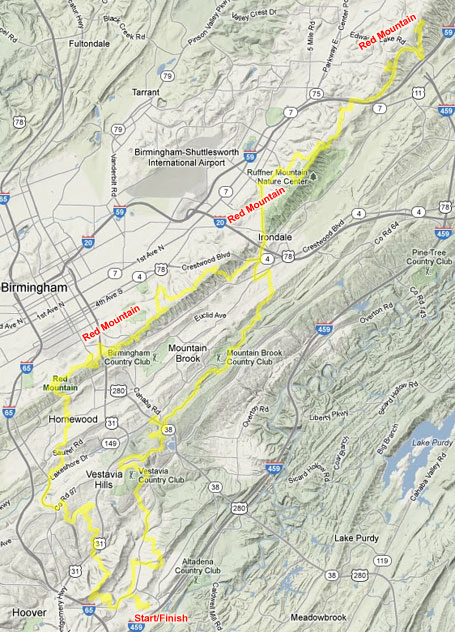 I pieced together these panorama photos I took on Shades Mountain looking towards Red Mountain. The labeled spots are all the places I crossed Red Mountain on my ride today. The 1200 ft spots are Ruffner Mountain (#5), St Vincents East Water Tower (#6), and Turncliff (#7). Ruffner and Turncliff each have two different 1200 ft summits for a total of 5 different 1200+ summits on the ride.

Part 1 – Red Mountain ridge crossings annotated – the 1200ft spots are #5, #6, and #7 on the northern end of the ridge which starts out from higher elevation (i.e, the whole valley is uplifted in that direction). This picture is taken from the Vestavia Dr high pt on Shades Mountain.

Part 2 – Red Mountain ridge crossings annotated – the 1200ft spots are #5, #6, and #7 on the northern end of the ridge which starts out from higher elevation (i.e, the whole valley is uplifted in that direction). This picture is taken from towards the bottom of Vestavia Dr on Shades Mountain.

So I wasn’t planning on going hard, but I knew that there were ton of steep climbs. As I got farther into the ride, I realized that trying to “go easy” was pretty much pointless because the terrain was either straight up or straight down pretty much the whole ride. I started out with a new climb up the Vestavia Forest ridge using the road that Jacob Tubbs had posted to Strava the other day. Then I took one of my favorite routes through Homewood to my first crossing of Red Mountain by the WBRC42 radio tower … this route involves climbing through a couple alleys, one driveway, a radio tower, two tree crossings and the Vulcan trail.

Then I headed down the mountain part of the way towards 5 points south before climbing back up towards the Vulcan before veering onto Warwick Dr to finish the second crossing of Red Mountain. I headed back down via a 49mph descent of Woodcrest before climbing back up via the 16th ave south alley with its super steep gradient including one section that might be close to 30% if you take the inside part of the switchback.

I descended again off the mountain over by Altamont before climbing back up again via Clairmont / 58th and then descending again at 49mph on Southcrest. I headed over to Oporto Madrid Blvd which could be better known as the “Ruffner Mountain” bikeway since it is the easiest way to get from Crestwood over to Ruffner Mountain. Technically, Oporto Madrid also crossed the Red Mountain ridge, but it is so low that I don’t really count it.

Finally, I made it to the first of the Red Mountain 1200s … Ruffner Mountain starts out with a gradual climb on Rugby before the grade really kicks up on 81st all the way to the Nature Center where you can hop a curb onto a somewhat paved trail up to the old firetower. From the nature center to the firetower averages 12% for 1/2 mile with a few short sections well over 20%. My original plan was to head back down the mountain past the nature center and take an alternate road in the valley to get back to the next crossing, but instead I decided to explore the trail across the top of the mountain, which I had never done before. It switches from paved to double track as soon as you turn right off the firetower. Then the double track turns into a dirt single track which takes you down very steeply to a saddle between the two 1200+ ft summits. The second ridge was way too steep (20-30%) and rutted for me to ride with the wet conditions from the rain from the thunderstorms yesterday morning so I just ran up the whole thing (maybe 1/10th of a mile). Once you make it to the water tower on top of the second ridge, there is a dirt / gravel access rd that descends very steeply to the Observatory Rd neighborhood.

From Observatory Rd, I descended down into South Roebuck before climbing back up to the St Vincents East hospital. There is a cement access ramp (see pics at the end) with a gradient well over 30% that leads onto a gravel rd which eventually turns into a leaf covered double track 16-18% climb to the water tower which at 1275 ft is the highest 1200+ ft summit that is accessible by bike (that I know of) on Red Mountain. Turning around at the top so as not to disturb the person working on the radio tower, I headed back down to the hospital and descended the other side towards Trussville. Just before you cross under the interstate, you can turn left into a really odd (but extremely cool) neighborhood called “Turncliff”. What makes this neighborhood really cool is that there are no houses until you get to the somewhat flattened summit of the climb. Along the way there are a few switchbacks and then a rolling section through a kudzu forest (i.e., kudzu has completely taken over). Towards the top, there is a very steep access road to the radio towers that is gated off. You can go around the gate, but you have to dismount and crawl through a narrow opening in the kudzu. Today, however, the gate was wide open so that made it much easier since I didn’t have to remount and start uphill on a 15% gradient. At the top, I turned around immediately and went back down to finish climbing the rest of the way up to the Turncliff neighborhood which is lower than the radio tower summit, but still just barely above 1200 ft. There are some cool 90 degree turns right before you get to the neighborhood … then you finally make it to the neighborhood and there are maybe 15 houses all on the summit of the mountain.

This was the “out” part of my out/back ride so from there I turned around and headed back home – bypassing all the summit side roads/trails but crossing back over the ridges. On the way back, I descended the Valley Hill climb which I think might be the steepest climb in Birmingham at 27% … the Google Maps streetview pictures below are the best I can do to illustrate how steep the climb is. I took some pictures, which are in the gallery but nothing ever looks as steep in a picture. 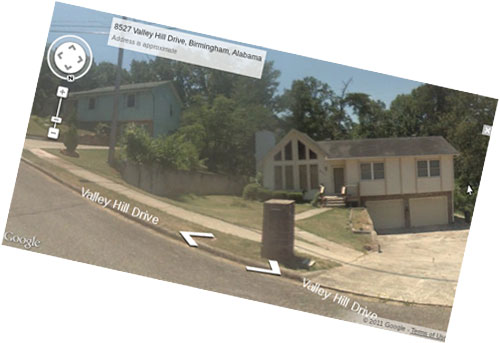 On the way back home, I ran into Lennie’s friend Aaron and rode back with him from Ruffner Mountain all the way to Cherokee Rd in Mountain Brook … it was fun talking about Leadville with him (he did it in 2009). When I finally made it back, I had climbed over 10,000 ft in a 63 mile ride. Here are some of the pics I took along the way:

Valley Hill near the top – looking towards downtown