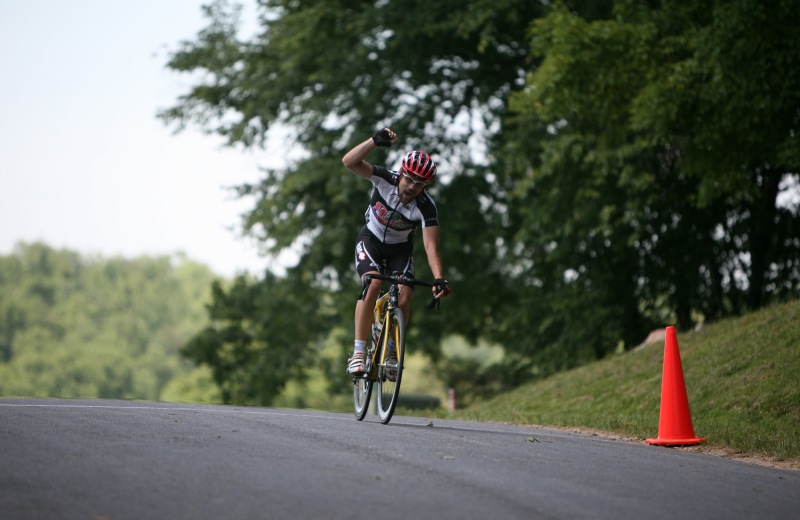 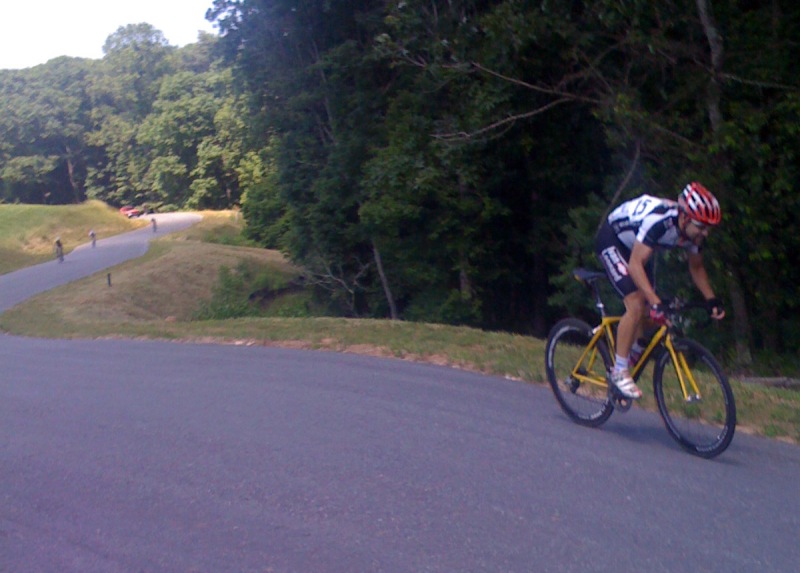 May 31, 2009 – 200 meters to left to go in the climb!
Photo credit: Kristine Toone. My wife took this picture about 200 meters before the finish – it gives you a good idea of how steep the hill was! I believe 2nd, 3rd, and 4th place are just off the lefthand frame of the picture not visible. Fifth, sixth, seventh, and eighth place are all visible with eighth being just in front or beside the red support truck. 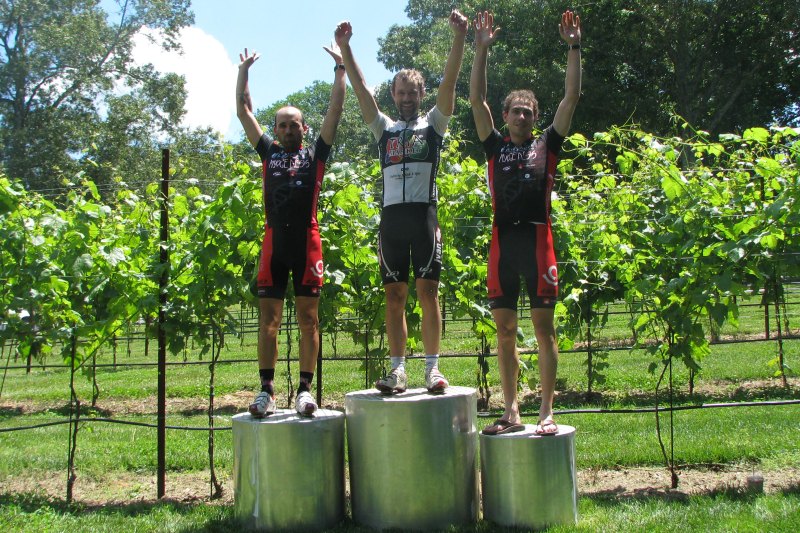 I am very happy to report that I won my first road race of the season yesterday! Here’s how the whole weekend of racing played out:

Time Trial (15.4 miles) – Saturday AM
I rode the course late Friday afternoon and thought the course was going to be a good one for me with so many ups and downs, twists and turns, sharp corners, etc… It was a really fun course — until you tried to ride it at Zone 5 – which just took all the fun out of it. I don’t know if my warm-up wasn’t long enough or what but my legs felt dead and after I got passed pretty early in the race, I rode at high Zone 3, low Zone 4 and ended up 8th. Paul Tower (Warp9bikes.com) was flying and he got second place just behind Eric Murphy (Myogenesis).

Circuit Race (3.2 mile circuit, 6 laps) – Saturday PM
The course was very technical and quite fun. The start/finish was at the top of a steep hill which dropped off about 150 feet on a switchback descent with average gradient of about 10% and one section of about 15%. We then worked our way up a gradual hill on another technical road with S turns eventually making it out onto a main road with a 5% climb for about 1/2 mile before diving back into the Winery (Montaluce Winery). From the entrance of the winery there was another drop with a couple sharp turns before hitting the steepest hill on the course … a short 15% power climb into two 90 degree turns to the finish. We went neutral down the hill on the first lap and as soon as we made it out of the winery, we were free to race. It was very fast and there were a number of break attempts that were all reeled back in. I made it into several breaks, but it always came back together on the technical gradual uphill on the backside of the course. On the last lap though, Oneal Samuel from Myogenesis and one other rider rolled off the front with about 1/2 lap to go. Dan Holt (Team Type I) put in a big attack with Eric Murphy and the rest of the field close behind. This brought us very close to Oneal who was still holding a 5 second gap going into the last climb. I was in about 8th position at the start of the climb which was way too far back, and I ended up passing a few people to finish 6th with Oneal just staying away. Omnium points were only given to the first 5 places so I still didn’t have any omnium points after Saturay’s racing.

Road Race (13.5 mile lap, 5 laps) – Sunday AM
We had our biggest field for the road race — about 20 riders, including Joe Eldridge and Dan Holt from Team Type 1; Oneal Samuel, Eric Murphy, and Adam Ray made up the Myogenesis team; me and Wes from our team; a couple riders from Pacesetters Steel, and then about 10 independent riders. We used the same start/finish as the circuit race, but in the reverse direction. Once we left the winery, we went out onto the area roads for most of a lap before returning into the winery in the reverse direction of the circuit course to climb back up to the finish. The course was constantly up or down with two distinguishing features amongst the rolling hills — a 1k climb with five or six switchbacks and a 1/2 mile steep finishing climb. We were neutral the first mile and a half as we left the winery, but as soon as we left the winery the race was on and I attacked right away. That didn’t work so well as we were all back together by the top of the hill out of the winery. We then had a pretty long descent before the first time up the switchback climb. I don’t think anybody attacked on the climb because the former pro from Colombia rode a fast pace at the front of the group. Once we made it up the climb and down the other side, we were all together and I attacked again on a false flat climb. When I was caught by the chasing field, a Pacesetters Steel rider took off and nobody chased. He quickly got a 1 minute lead on the group heading towards the end of the first lap where three KOM positions (points towards the omnium) were up for grabs. The Pacesetter rider stayed away to take maximum points on the KOM with me, Eric Murphy, Adam Ray, and Oneal Samuel to fight for the second and third position. Eric and Adam attacked on the 15% gradient part of the climb and I moved from about 5th into a chasing position. Right as I caught Adam, Oneal came around me so it was Eric an Oneal taking second and third on the KOM. That was all the excitement on Lap 1.

On Lap 2, there were again several attacks and some of the independents started to get to the front and work hard to try to bring back the pacesetter rider. I couldn’t understand that because Myogenesis and Team Type I and our team were the strongest teams there and so if anybody should have been chasing it should have been us … but it was a long race and the rider wasn’t too far ahead so we weren’t in any hurry to bring him back. We did catch him towards the top of the switchback climb which we flew up. There was a gap from the first three or four of us towards the top so I drilled it across the top to try to get a small break going. That was incredibly fun to be on the attack on the switchback descent down the other side. Unfortunately, it didn’t quite have the intended effect as I also gapped the people who I wanted to be in the break with me. So by the time they caught back up, the field was almost all back together. This is when Wes made his move attacking on the false flat hill and getting a good gap. Adam Ray (Myogenesis) attacked to bridge and then shortly afterwards the Pacesetter Steel rider who was away earlier attacked again to bridge. This threesome quickly got a good advantage on the field. This was perfect for me because now Wes was in a break with a real chance of staying away to the end — so all I had to do was cover moves. Again, the independents came to the front and tried to pick up the pace, but it wasn’t until Dan Holt from Team Type I stepped in that the gap started to come down.

By the start of the fourth lap, the Pacesetter rider had fallen off the break leaving Adam and Wes alone to work together to the end. They made it until the switchback climb on the last lap when we caught Wes near the top of the climb and then Adam shortly after the descent. A few miles later, Wes attacked again and got a good gap by himself. Myogenesis had to come to the front to chase. A couple miles later, they had brought Wes back and I believe there may have been one or two other short lived attacks from other riders. With about 5 miles to go, Wes attacked hard again and again Myogenesis was forced to chase. I attacked when Wes was reeled back in, but I didn’t make it very far. Dan Holt (Team Type I) put in a strong counter attack which sent me sailing backwards to about 8th position before I could catch back on. The pace slowed again after Dan got caught by Myogenesis, and so we entered the finishing climb going pretty slow. I had worked my way up a few more positions when Eric attacked hard on the 15% part of the climb. I was able to follow and get right on his wheel heading into the very short flat section before the final kicker. I took advantage of the little bit of draft to come around him hard at the start of the final kicker. I figured both he and Oneal were going to be right on my wheel ready to come around, but it turns out that my attack opened up a gap that I was able to extend all the way to the line! I couldn’t believe it after I crossed the line and looked back after the finish to double-check that they weren’t still racing with maybe one more lap to go!!!

Again, perfect teamwork with Wes taking the pressure off my shoulders so that I could surf the pack and cover moves while he had a chance to stay away and possibly win from the breakaway. When that didn’t work out, he kept on working by putting in attacks which softened up the other teams and enabled me to have the freshest legs for that finishing climb. Awesome!!!

My win in the road race earned me enough omnium points to move me up to 4th overall for the weekend.